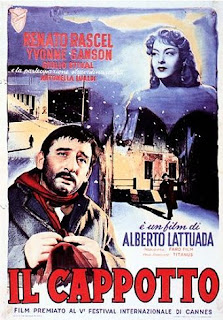 Among the comedies in costume, set in other periods and other countries, the representation of characters and environments of old Russia was chosen by a sensitive director, Alberto Lattuada, capable of completely identifying himself with that world, uniting a sense of humor, a knowledge of the culture and a gift for recreating its particular flavor (through scenery, costumes, the style of acting).
IL CAPPOTTO (THE OVERCOAT: 1953) brought to the screen one of the finest novels by Nikolai Gogol, but contrary to the director's usually scrupulous attention to historical detail, he moved the story from the 19th century to the present day and, while avoiding any specific geographical indications, from Russia to Italy. Akakij Akakievich became Carmine De Carmine, the film was shot on location in the Lombardy city of Pavia. It is the story of a little man oppressed by the authorities. One day Carmine decides to put together the little money he owns to buy himself a new overcoat, which is so handsome that the modest tailor who made it shadows him to admire the effect it has on passers-by. But the coat is soon stolen and for Carmine nothing remains of the sole blessing that had made him happy for a day. Carmine dies and as a ghost has a much more lively time compared to his grey and monotonous existence; constantly appearing and reappearing in the life of the city mayor, his persecutor, the symbol of cynical and self-interested "power", he persuades him to mend his ways. The script-writers, including Cesare Zavattini who contributed many amusing gags, provided the director with a script respectful of the Gogol original but also full of new inventions. Stylistically, the film deliberately wavers between realism and the surreal fable, benefiting enormously from the presence of a comedian at that time famous for certain elements of "nonsense" introduced into the light theater revue and instead poorly exploited by motion pictures which up till then had humiliated his talents in farces of no importance: Renato Rascel. Placed in a specific psychological framework, Rascel endows his Carmine with a quality of suffering that is never over-stated and can also find expression in a sudden comic twist. Italian comedy, by combining Lattuada's narrative and dramatic talent and Rascel's gifts for humor, attains with IL CAPPOTTO (THE OVERCOAT) one of its highest and most ambitious achievements. (Lattuada would go on to direct CUORE DI CANE - A DOG'S HEART, which will be discussed in a later chapter).
Posted by William Connolly at 12:21 PM