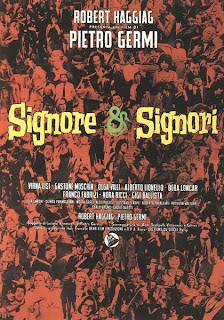 by Ernesto G. Laura
In 1966, Germi won the Gold Palm (ex-aequo) at the Cannes festival with SIGNORE E SIGNORI (LADIES AND GENTLEMEN), in which he moves his criticism of manners to the Veneto bourgeoisie, using the town of Treviso as his geographical and social setting. Veneto writer Luciano Vincenzoni collaborated closely with the director on the story and script (Age and Scarpelli helped with the latter), fitting together a mosaic teeming with figures, large and small, of a colorful human "bestiary", caught in the merry-go-round of hypocrisy which Germi attacks with a firm polemical thrust. A multitude of well-known actors moves through the film, each given a space of his own: from Alberto Lionello to Olga Villi, from Gigi Ballista and Gaston Moschin to Virna Lisi and Franco Fabrizi.
One gets, even so, the impression that Germi didn't preserve on screen everything he had observed and that the film, however amusing and well-constructed and however skillful the dialogue, offers a less definitive picture of that bourgeois society than it could have been, sometimes bordering on the caricature sketch, which is something less than satire.
L'IMMORALE (THE IMMORALIST: 1967) was polemical, starting from the title itself. Instead of the analysis of a provincial society, as in his other two comedies, the director (with the collaboration on the script of Alfredo Giannetti, Tullio Pinelli and Carlo Bernari) pauses to shed light on the paradoxical situation of a single character, a violinist who, with a certain seriousness of his own, takes up with other women aside from his wife, ends up having three homes and three families, children included, and is forced to run from one train to another to keep his different wives happy and also wearing himself out from the fulfillment of his marriage "duties", until he dies from a heart attack. Germi doesn't pass judgment but is interested in exploring the soul of this man, who from the outside would seem to be a kind of playboy but is capable, instead, of a very special and sincere kind of loving of his own. Ugo Tognazzi was the violinist, Stefania Sandrelli, Renee Longarini and Maria Grazia Carmassi his three women.
Posted by William Connolly at 11:36 AM