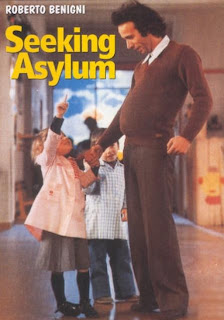 by Ernesto G. Laura
Several well-known figures, already popular on television or in the theater, sought in this period to break into movies. Such was the case with Roberto Benigni, a Tuscan cabaret comedian, who in BERLINGUER, TI VOGLIO BENE (BERLINGUER, I LOVE YOU), directed in 1977 by Giuseppe Bertolucci, he is a provincial yokel full of complexes with regard to women. Benigni revealed a sure talent in CHIEDO ASILO ("asilo" means both refuge and kindergarten, so SEEKING REFUGE or SEEKING KINDERGARTEN), directed in 1979 by Marco Ferreri, where he is an eccentric, absent-minded, unconventional and utterly engaging kindergarten teacher who, ignoring all known pedagogical methods, succeeds in capturing the attention and then the affection of his pupils. The symbolic ending provides the allegorical key to a comedy in a category by itself, where satire and irony, a sensitivity to lofty values and a deep hope for the future blend together in a memorable achievement.
Nanni Moretti (ECCE BOMBO, a distortion of the Biblical phrase, "ecco homo": Behold the man!, so BEHOLD BOMBO), Maurizio Nichetti (RATATAPLAN and HO FATTO SPLASH!, I MADE A BIG SPLASH!), Carlo Verdone (UN SACCO BELLO, A BIG DEAL) are rather more comedians in the classic tradition than light comedy actors. Situated between the comedians and the light comedy actors are Lando Buzzanca and Pippo Franco, the latter firmly anchored to the cabaret spirit.
Posted by William Connolly at 1:26 PM