13. The "Second Wave" of Comedy Actors part one 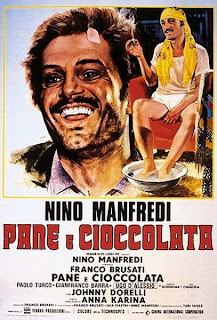 by Ernesto G. Laura
In the decade, 1970-1980, a "second" wave of Italian-style comedy actors appeared on the scene, along with Sordi, Tognazzi, Manfredi and Gassman, who maintained their popularity.
Some of them already worked in films, even in leading roles, but had not had a real opportunity to rise from the ranks of qualified professionals to a star status around which a film could be built.
Such was the case of Johnny Dorelli (Giorgio Guidi, born in 1937, the son of a well-known pop singer of the '30s, Nino D'Aurelio). Small of stature with a good-natured disposition prone to smiles, Dorelli was launched into show business in America by the conductor, Percy Faith, and in the '50s often appeared there on television. Returning to Italy, he won several San Remo Song Festivals and from there won easy access to Italian television where he introduced the formula, common in America but at that time unknown in Italy, of the singer who was also an entertainer, hence able to carry the weight of a full show, establishing immediate contact with the audience. With all this, it was obvious that motion pictures would seek to exploit his gifts as a singer, as well as his immediately apparent merits as an actor, but in the beginning he was used in second-rate films or only as a singer. PANE E CIOCCOLATA (BREAD AND CHOCOLATE: 1974) by Franco Brusati, which has already been mentioned with regard to Nino Manfredi, and his extraordinary performance, revealed an unexpected Dorelli in the cameo role of an Italian industrialist who has fled to Switzerland for tax reasons and then commits suicide when his wife abandons him. The simplicity of manner, the good-heartedness, the smile that Dorelli had already identified with his "personage" here became the dramatic defense of a man who is sliding inexorably towards self-destruction.
The interest aroused by PANE E CIOCCOLATA (BREAD AND CHOCOLATE) enabled Dorelli to escape the rountine of second-rate films and seek a path of his own within Italian-style comedy. UNA SERA C'INCONTRAMMO... (ONE EVENING WE MET...: 1975) by Piero Schivazappa was based on the novel AMARE SIGNIFICA... by Italo Terzoli and Enrico Vaime (in the 1970s, after a long absence, the Italian humorous novel regained popularity: the new authors included Carlo Silva, Umberto Simonetta, Castellano and Pipolo, and the Terzoli-Vaime team). The main comical idea, with its overtones of bitterness, involved the passion of an enormously fat girl (German actress Fran Fullenwider) for a skinny little workman (Johnny Dorelli), a situation complicated by the fact that the girl, who was very possessive, was also a rich man's daughter. The Lombardy setting added flavor to the film both as scenery and in the use of an Italian idiom that was a blend of different dialects, both far removed from the usual Roman environment of Italian-style comedy.
Posted by William Connolly at 2:13 PM