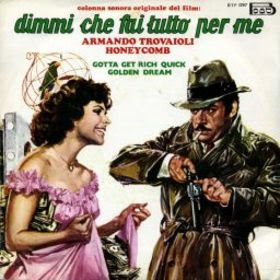 by Ernesto G. Laura
Dorelli would subsequently find a good director in Pasquale Festa Campanile, who directed him in DIMMI CHE FAI TUTTO PER ME (TELL ME IT'S ALL FOR ME: 1976), a whimsical criticism of conventions in which the actor appears with Pamela Villoresi, Grazia Maria Spia and Andrea Ferreaol (the script was by Castellano and Pipolo), in CARA SPOSA (DEAR BRIDE: 1977), written by Franco Verucci, and based on the idea of the platitude that the man from Milan is a hard worker whereas the Neapolitan is an "artist" but a slacker (here, in fact, Dorelli is a dreamy idler, while the excellent Agostina Belli is a Neapolitan girl with her feet on the ground, constantly at work), in COME PERDERE UNA MOGLIE...E TROVARE UN'AMANTE (HOW TO LOSE A WIFE...AND FIND A MISTRESS: 1978), written by Gianfranco Bucceri, Roberto Leoni and Luigi Malerba, which attempts to place the typical French "pochade" into an Italian framework.
Less persuasive, the adaptation of Piero Chiara's novel, IL CAPPOTTO DI ASTRAKAN (THE ASTRAKAN OVERCOAT: 1979) by Marco Vicario which impoverishes the original merits of the novel. Johnny Dorelli's gentle and expansive nature was nicely coupled with the sharp, polemical wit of Monica Vitti in AMORI MIEI (MY DARLINGS: 1978) by Steno, and in PER VIVERE MEGLIO DIVERTITEVI CON NOI (TO LIVE BETTER HAVE A GOOD TIME WITH US: 1978) by Flavio Mogherini.
Posted by William Connolly at 12:09 PM