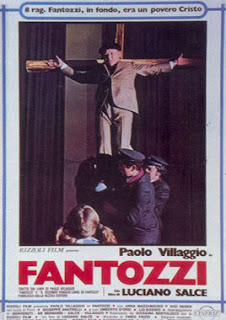 by Ernesto G. Laura
Paolo Villaggio (born in Genoa in 1938, therefore more or less a contemporary of Dorelli and Celentano) reached the theater in the late '60s (with experimental and avant-garde texts of a grotesque nature) after working in cabarets. But real popularity came to him from television where he emerged as an unconventional comedian and an equally extraordinary showman: instead of trying to win his audience, he assailed it, sometimes even insulted it, he was provocative. This attitude contained a criticism from within of the old approach to television and enormously appealed to the general public: he was one of the first intelligent, indeed "intellectual" comedians.
In motion pictures, he was used as a guest star, like every other showman launched by television: for example in Monicelli's BRANCALEONE ALLA CROCIATA (BRANCALEONE IN THE CRUSADES). Lino Del Fra directed him in the leading role of LA TORTA IN CIELO (THE PIE IN THE SKY: 1971), a bizarre, fiercely anti-militaristic fable in which he plays a war-mongering general (the story was based on a book by Gianni Rodari).
Before becoming an actor, Villaggio had been a modest office clerk in a metallurgical firm. It was from this experience that he drew the portrait of a shy, frustrated office clerk full of complexes, constantly mistreated by his superiors and mocked by his colleages: the book-keeper FANTOZZI. This was the name of a humorous novel with which he made his debut as a writer and which was an immediate best-seller. The neurotic Fantozzi, who creates troubles and calamities wherever he goes, becomes the vehicle for bringing to the screen the world of big business with a stinging satire that never misses the mark. FANTOZZI was made into a film in 1975 by Luciano Salce, on a script written by Villaggio himself with Benvenuti, De Bernardi and Salce. As an actor, Villaggio was the ideal interpreter of his literary creation, and whoever had seen him in his conventional aggressive and polemical stance could not fail to admire the way he succeeded in getting inside this pathetic figure of the born loser. Salce and Villaggio had the courage not to surround him with the usual "sex-bunnies" but with two character actresses from the theater who were full of satirical "bite", Anna Mazzamauro, the office colleague, and Liu Bosisio, the wife. Equally amusing results - also in book form - were obtained by the ensuing IL SECONDO TRAGICO FANTOZZI (THE SECOND TRAGIC FANTOZZI: 1976), directed again by Salce with the same principal actors. Villaggio went on to play similar roles in two other Salce films, IL...BELPAESE (THE FAIR LAND: 1977), written by Villaggio with the director and with Castellano and Pipolo, and RAG. ARTURO DE FANTI, BANCARIO PRECARIO (ACCOUNTANT ARTURO DE FANTI, TEMPORARY BANK CLERK: 1980).
Posted by William Connolly at 4:36 PM