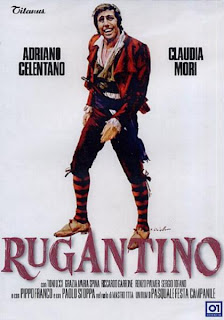 by Ernesto G. Laura
In the '60s, the transition from a light theater, with the shallow and evasive forms of the musical revue, to that form of theater, Anglo-Saxon in origin, known as musical comedy, led to excellent results in RUGANTINO, which opened at the Teatro Sistina in Rome in December, 1962, and after a triumphal Italian tour, appeared on Broadway in 1964, with Nino Manfredi in the title role. Rugantino was a young man in the Papal Rome of 1830, addicted to practical jokes and women and friend of the inn-keeper Mastro Titta, who was also the public executioner. In the end, accused of a murder he hasn't committed, he is beheaded. The chief merit of the comedy, aside from the tuneful music of Armando Trovajoli, lay in the exact reconstruction at once affectionate and satirical, of a popular Rome that no longer existed but was perfectly familiar both in its human and moral values and in the images handed down by old prints. The authors of the text and directors of the show were Piero Garinei and Sandro Giovannini, inventors of the Italian musical comedy, on the one hand, and Massimo Franciosa and Pasquale Festa Campanile, who were also film writers, on the other. Luigi Magni collaborated on the text.
It was the enormous success - unexpected, at least to that extent - of RUGATINO in the theater that gave rise to the Italian-style film comedy in costumes of the past, related to Rome in particular. In 1964, Franciosa and Festa Campanile, again with the collaboration of Luigi Magni, wrote (and then directed) LE VOIC BIANCHE (THE TREBLE VOICES), which ingeniously brought several of the basic ingredients of RUGATINO to the screen: once again the setting is in Papal Rome (but in the 18th century), the main character is a young man who devotes most of his time to chasing women and ends up on the scaffold. This time the story deals with the subject of "castrati", those poor but good-looking boys who in the 18th century were subjected to a delicate surgical operation after which, with the loss of their manhood, they could sing with "treble" (or falsetto) voices in concerts and in the foremost opera houses. The film lapsed into moments of heavy humor, into some vulgarity, but was interesting, even so, in the way it utilized the authentic exteriors of Rome (villas, gardens, archeological remains) to set the story in a non-fortuitous framework and to recreate the imagery of old prints. What was impossible in the theater became easy in the movies: the natural scenery (the film was shot almost entirely on location) lent a remarkable suggestiveness to even the more banal sequences.
It seems proper at this point to stress the decisive contribution a "lover of Rome" like Luigi Magni must have made to both RUGANTINO and the Franciosa and Festa Campanile film. It was only natural that he should have continued along this path on his own as a fully independent artist.
Posted by William Connolly at 12:39 PM