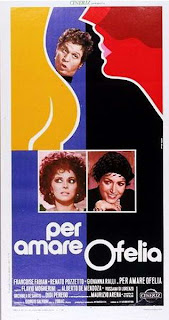 by Ernesto G. Laura
Renato, also returning to his full name, Renato Pozzetto, stuck instead to a single character, the nice young boy, slightly indolent but full of good intentions, and rang up one success after the other, exaggerating perhaps only in quantity (which is often to the detriment of a deeper investigation of the characters). He was, in any case, unquestionably one of the surest comic talents of the '70s, as was apparent starting with PER AMARE OFELIA (TO LOVE OFELIA), directed by Flavio Mogherini in 1974, for which he won the "Silver Ribbon" as the best first-film actor. He played the part of Orlando, a young business manager who tries to get rid of an Oedipus complex that prevents him from loving women, a piercing criticism of the phenomenon of "Momism". In PAOLO BARCA, MAESTRO ELEMENTARE PRATICAMENTI NUDISTA (PAOLO BARCA, ELEMENTARY SCHOOL TEACHER, PRACTICALLY NUDIST: 1975), also by Mogherini on a story by Ugo Pirro, he plays the carrying role in an amusing comedy of manners on a certain provincial bourgeoise mentality in Sicily.
DUE CUORI UNA CAPPELLA (TWO HEARTS, A CHAPEL: 1975) by Maurizio Lucidi seasoned a love triangle with black humor and a bit of suspense, with Pozzetto, inconsolable habitue of a cemetery who falls in love with a young widow, equally assiduous in her visits to a neighboring grave (she was Agostina Belli). STURMTRUPPEN (STORM TROOPERS: 1976) brought the Cochi and Renato team back together again, thanks to Salvatore Samperi, the director who started with tragedies like GRAZIE ZIA (THANKS, AUNTIE) and CUORE DI MAMMA (MUMMY'S HEART), which already included however satirical and grotesque elements, and ended with comedies, always as a way of criticizing the moralism of modern society. STURMTRUPPEN is a comic strip that first appeared in a Rome evening newspaper and was subsequently collected into numerous books: Bolognese cartoonist Bonvi recounts the vicissitudes of the Nazis at the front during the war with a fierce satire aimed both at the fanatical officers and the block-headed troops. In the film, Cochi and Renato wrote the script of their individual characters (Ponzoni was the factious and haughty officer, Pozzetto the dim-witted soldier), contributing to the realization of a sort of filmed cabaret act. GRAN BOLLITO (BIG STEW), directed in 1977 by Mauro Bolognini, cast Pozzetto as one of the potential victims of Shelley Winters in the role of a murderer who became famous all over Italy right after the war, revisited however in a satirical key. At present, the most convincing result attained by Renato Pozzetto (who also directed a film, SAXOPHONE, in 1976) is LA PATATA BOLLENTE (THE HOT POTATO: 1979) by Steno, who delicately confronted, in the style of a light comedy of manners, the problem of homosexuality. Pozzetto was a factory worker in Lombardy who, for having gone to the help of a young boy beaten up by a gang of toughs and taken him home to get well, is teased maliciously by his fellow workers, who accuse him of not being "manly". The young boy is, in fact, a homosexual and he steps aside when he realizes that the worker, while not thinking in the least of having an affair with him, would be forever cut off from his working environment if he remained his friend. The subject is thorny, but director and leading man (the other is actor-singer Massimo Ranieri) carry it off playing on nuances and avoiding vulgarity.
Posted by William Connolly at 11:49 AM