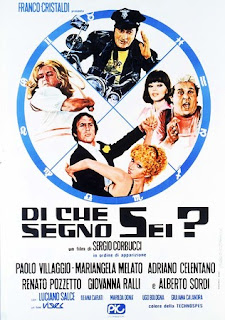 by Ernesto G. Laura
At the outset, Celentano used the stage-name "Adriano il Molleggiato" (Adriano The Rolling Spring), and in fact the way he swayed around his long double jointed body as he sang was one of his immediately recognizable trademarks. From the "rolling spring" he passed to dancing and in DI CHE SEGNO SEI? (WHAT'S YOUR SIGN?: 1975) by Sergio Corbucci he portrayed with great spirit and genuine talent a young man from the outskirts who takes part in a dancing contest. In the second episode of QUA LA MANO (GIVE ME YOUR HAND), "Acqua santa e rock 'n' roll" (Holy Water and Rock 'n' Roll), directed by Pasquale Festa Campanile in 1980 and written by Ottavio Jemma and Enrico Oldolini on a story by the latter, he appears in several rip-roaring dance numbers as an energetic and naive priest from Romagna (certainly not forgetting Guareschi's Don Camillo) who has a "mania" for dancing and on Saturday night gets dressed up in civilian clothes and slips off to the discotheque of a neighboring town. As a director, the actor-singer beat all box-office records with YUPPI DU in 1975, a film he edited and also helped write. As in his songs, Celentano tries to sustain deep human values, in the present case those of love, but he does so with the innocence and sometimes the superficiality of the self-taught man. It's the story of a poor devil, Felice Della Pieta, who lives in a dreary damp hovel in Venice with his second wife, Adelaide (actress Claudia Mori, his real wife). It's a destitute but peaceful life, in which the deep bond of love helps the couple face all the hardships and deal with all the problems. But things become complicated when his first wife, Silvia (Charlotte Rampling), reappears; she had been given up for dead, and precisely for having drowned herself in the river, whereas actually she had simply run away from that hopeless life. Drawing upon various stylistic sources, with inklings of even Bunuel and Fellini, Celentano comes up with a "grotesque" full of humor and vitality with some visual ideas of extraordinary effect (Milan, the big city Felice has never seen and where he goes to find Adelaide, his only true love, is given an almost dreamlike quality, with crowds of people with their faces painted all white). The innocent yokel, ignorant of the "guile and cunning" of the world or of the value of money reappears, as a type, in the other film directed (and also written and produced) by Adriano Celetano in 1978, GEPPO IL FOLLE (GEPPO THE FOOL).
Posted by William Connolly at 12:37 PM