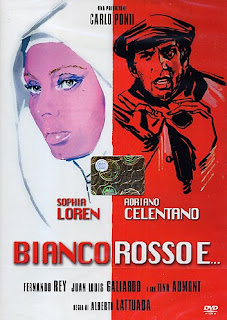 by Ernesto G. Laura
As to Adriano Celentano (Milanese like Dorelli and a year younger, having been born in 1938) success in films also came some time after his professional debut. In the beginning, Celetano made a name for himself in dance halls and vaudeville theaters as an imitator of Jerry Lewis. Between the late '50s and early '60s, Italian pop music underwent a deep change, leaving behind the tuneful sentimental ballads it had thrived on for decades and embracing the new phenomenon of "cantautori", that is of singers who wrote their own songs, using a more essential and direct language, music in which the guitar was preferred over the big bands of yesterday, a sharp, pounding beat that led the new pop stars to be known as "howlers". Celentano, abandoning imitations, soon revealed a dynamic, outgoing vulcanic personality. He appeared briefly as a night club singer in Fellini's LA DOLCE VITA (THE SWEET LIFE: 1959), then carried on with a not particularly outstanding film career for several years, as his popularity grew in the field of television, pop concerts and records.
Meanwhile, imitating Sinatra, he formed the "Adriano Celetano Clan", consisting of singers, musicians, arrangers who since then have worked permanently for him. In 1968, Pietro Germi, as mentioned above in the chapter devoted to him, insisted upon having Celentano for the title role in SERAFINO, a rustic peasant comedy. In 1971, Alberto Lattuada starred him in BIANCO, ROSSO E... (WHITE, RED AND...) with Sophia Loren. In RUGANTINO (1973) by Pasquale Festa Campanile, he brought to the screen the musical comedy that Nino Manfredi had appeared in on stage.
Posted by William Connolly at 1:41 PM