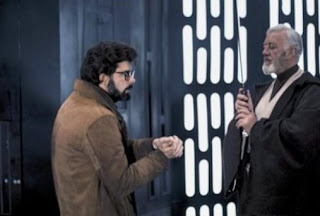 From: A POSITIVELY FINAL APPEARANCE
A Journal 1996-98
by Alec Guinness
A refurbished STAR WARS is on somewhere or everywhere. I have no intention of revisiting any galaxy. I shrivel inside each time it is mentioned. Twenty years ago, when the film was first shown, it had a freshness, also a sense of moral good and fun. Then I began to be uneasy at the influence it might be having. The bad penny first dropped in San Francisco when a sweet-faced boy of twelve told me proudly that he had seen STAR WARS over a hundred times. His elegant mother nodded with approval. Looking into the boy's eyes I thought I detected little star-shells of madness beginning to form and I guessed that one day they would explode.
'I would love you to do something for me,' I said.
'Anything! Anything! the boy said rapturously.
'You won't like what I'm going to ask you to do,' I said.
'Anything, sir, anything!'
'Well,' I said, 'do you think you could promise never to see STAR WARS again?'
He burst into tears. His mother drew herself up to an immense height. 'What a dreadful thing to say to a child!' she barked, and dragged the poor kid away. Maybe she was right but I just hope the lad, now in his thirties, is not living in a fantasy world of secondhand, childish banalities.
Posted by William Connolly at 1:28 PM