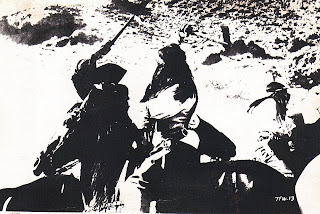 From: SO YOU WANT TO MAKE MOVIES
My Life As An Independent Film Producer
by Sidney Pink
Now with the casting completed, we needed only to find locations for the cruel and vicious terrain the script called for. The seven women were going to go through hell as presented in the script, and I intended to impart the feeling of realism required.
There would be no makeup or sophistication about these women except in the opening sequence, where we would allow the two circus performers, played by our Italians, to appear as overblown as people envision circus women to be. The character played by Maria Perschy, a German woman looking for a new life with her husband and babe in arms, could not look glamorous. When her child is killed in the first Indian raid, she goes slightly mad, leaving no room for glamour. Maria Mahor played a Southern belle whose idea of makeup was to pinch her cheeks instead of using rouge. Perla Cristal portrayed a buxom Mexican woman and was not called upon to be anything but earthy, while Crista was a sixteen-year-old Irish refugee, totally naive and unworldly. Anne Baxter played a spinster schoolmarm, brainwashed by her sister and brother-in-law (also members of the caravan) into making the long trek west with the "brides for pioneers" party. This ill-assorted, nothing-in-common group would find themselves involved in a journey that no other women in history had ever faced. Glamour was out, removing the specter of jealousy and calls for the makeup artist that would ordinarily have dogged a picture with so many beautiful and talented actresses.
We sent our production manager and a team to Almeria, where most of FINGER ON THE TRIGGER was shot, with instructions to find the most desolate area in that most barren part of Spain. I armed them with pictures of the Arizona desert and demanded this be duplicated before they returned home. I needed no fewer than five hundred horses and Indians, thirty-six Conestoga wagons, and a dozen buckboards for our caravan. I gave them picture books of the Indians with sketches of the kind of valleys and hills needed for the ambush and fight scenes. Part of tyhe action took place in a cave, and since I refused to have a fake one built in the studio, we needed one large enough to permit the seven women and our camera crew to work in relative comfort. These challenges guaranteed that the production team would be gone a minimum of three weeks, allowing me to get going on the other films we needed to put in production to fulfill our contract commitments.
We soon learned that signing a contract does not automatically assure its fulfillment. Involvement with so many people and so many production headaches at one time guaranteed sleepless nights for our whole crew. Elorietta was busy with his Western, and as I had learned long before, the best way to ensure a completed, acceptable film from him was to leave him to his own devices unless he asked for help. He was on schedule and seemingly happy until he ran into a problem he was unable to resolve.
His script called for a sixteen-year-old actor, and he had been unable to find a Spanish youngster able to master English sufficiently to do the dialogue. He would be at a standstill if he didn't get someone immediately. I resolved that problem quickly by having my fifteen-year-old son Philip play the part. Although Phil had never acted before, his entire life had been spent in and around movie stages, and I figured some of it had to rub off. He played the part as though he had been an actor all his life, and he developed a long-lasting relationship with Elorietta that made my life more simple. Elorietta wanted him on every picture as dialogue director and assistant, and Philip kept me informed of everything that went on in Elorietta's productions without anyone feeling I was spying. Philip did a great job for us and soon made a reputation for himself based on his own talent.
Posted by William Connolly at 11:54 AM