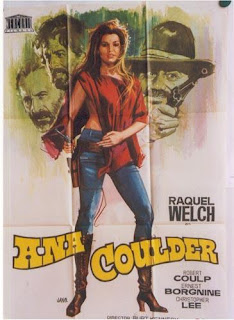 From: ERNIE the autobiography
by Ernest Borgnine
HANNIE CAULDER gave me a chance to work with one of the great western directors, Burt Kennedy, who had made hits like THE WAR WAGON and SUPPORT YOUR LOCAL SHERIFF. This one starred Raquel Welch, Robert Culp, Jack Elam, Strother Martin, Christopher Lee, Diana Dors, and me. I'm the oldest of three brothers who come into a little town, mess up a robbery, and end up hiding at a little horse ranch where they discover Raquel Welch and her husband. We kill him, rape her, then get picked off one by one after a bounty hunter, played by Robert Culp, teaches her how to shoot.
Despite the rough subject matter, we all had fun on that picture. Raquel was - and still is - a breathtaking beauty, and she had great natural instincts. The actor who really shines, though, is Bob Culp. This guy is one of our great national treasures. Watching anything he ever does, whether it's BOB & CAROL & TED & ALICE or I Spy on TV or a western like this. He's convincing in everything because, like Gary Cooper, he's one of the great listening actors of all time. I wish I had half of whatever he's got.
The picture didn't make much of a splash. It was an era of anti-heroes, like we had in THE WILD BUNCH. Traditional westerns weren't the box-office successes that had once been.
I remember at one luncheon of the Hollywood Foreign Press Association, who should I be sitting across from but dear Raquel. I remember sitting there thinking, Hey - I rolled her around in the hay, once.
I hope nobody noticed me smiling.
Posted by William Connolly at 7:42 AM