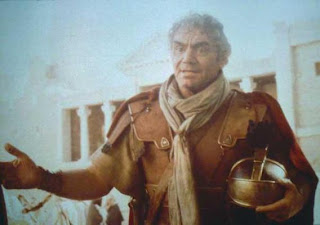 From: ERNIE the autobiography
by Ernest Borgnine
I went back to the distant past for my next project. Not in a toga, but as a Roman centurion in Franco Zeffirelli's 1977 epic Jesus of Nazareth. Franco is the man who gave us the classic ROMEO AND JULIET, among other great films.
This was my first TV miniseries. It was shot in Tunisia and we had an amazing cast. Robert Powell was Jesus, and we had Tony Quinn, Anne Bancroft, Laurence Olivier, Claudia Cardinale, James Mason, James Earl Jones, and Christopher Plummer - in other words, "the works"! It turned out to be one of the best pictures of its kind. It was pious without being like a Sunday school class, and powerful without being over-the-top-bloody, if you catch my meaning.
Franco was a terrific director. He didn't do much direction. He just made a little adjustment here or there, mostly toning things down. He trusted his actors. He also loved Tova's soap. My wife had started a cosmetics line that was heavily advertised on TV and turned into a real industry. Franco liked the soap because where we were shooting the water was so hard that you couldn't get up lather. Tova's soap would foam up in the hardest water you could imagine.
Working in a foreign location with actors who often have thick accents is a chore. Local regulations require that local actors have to be used in smaller roles, but their English usually isn't up to snuff and they have to be dubbed later on. For that reason, to save money, producers don't bother recording sound on locations. They just have us come in and dub it later. Because there's no recording, the sets tend to be very noisy with people yelling and construction workers hammering and trucks coming and going. It is incredibly difficult to concentrate.
One thing that stands out vividly on this shoot were all the animals we had, and all the animal smells. It was pretty awful. I know the beasts gave Franco a hard time, all the donkeys, giraffes, elephants and things you wouldn't believe. It seemed like every time you turned around, one animal wanted to attack another. (The well-endowed donkeys were ready to go at it with the giraffes.) Franco was yelling in Italian "Vada, eliminli!" - "Take them away!" and he would push them. No wonder he needed soap at the end of the day!
My first scene in this picture was when I, a great Roman warrior, went to ask Jesus to cure one of my servants, who was dying. As I started to beg, an extra ran up and said, "You should see your man, he's well, he's alive, he's happy." I looked back at this man, with his piercing blue eyes, and for a moment I was literally transported. For that second, he was Jesus Christ. It passed quickly, but it was one of the most surreal experiences I've had on a shoot. Not the most incredible, however. That was still to come.
I had a scene where I was looking up at Jesus after he'd been nailed to the cross. My preparation for this was pretty soul-searching. My feeling as the centurion was, "I've been in the army for a long time, but I don't like what I see. This man actually saved my servant, and now look what they're doing to him. I'm going to get out of the army."
The shot required the cameras to be looking down on me. Jesus was not in the frame. But it was important and Franco wanted me to get it right. So he said, "I'm not going to put the actor up on the cross."
I said, "No, just put a dot up there. I'll be able to work from that. Don't worry about it." I didn't want Powell to have to go up there.
So they put a mark where I was supposed to look and they had a camera right alongside it. They had another camera over on the other side, another camera behind me, looking down on me, and a fourth one behind the cross. Some directors like to have a lot of choices when they get in the editing room. It's better to have too much footage than not enough.
When everything was set, I said to Franco, "Would somebody please read what Jesus said on the cross: 'Forgive them for they know not what they do.'"
Franco said, "I will say it."
So we started. I was looking up at this dot on the cross as Franco said the words and, so help me, I actually saw the face of the Lord. A moment later his face dropped down to his shoulder and he was dead.
Tears as big as teacups came from my eyes, I swear to God. I started bawling like a baby. I just stood there with the tears coming down. Finally I heard "Cut".
I came back to reality, to the realization that we were actually making a picture.
Franco said, "Ernesto?"
I choked out, "Yes."
He said, "That was wonderful. Now, Ernesto, do you think you can do it one more time with less tears?"
I wanted to kill him. He had something real on film, and now he wanted me to fake it. Well, he was the director. In the finished film viewers see pieces from both takes. Though they almost didn't see any of them.
General Motors was sponsoring the show for Easter and when they saw the picture, they didn't want to show me crying. I don't know why. Maybe they thought it was a knock at the military, having a soldier cry. Or maybe they thought it was a little too reverent. I don't know. But the Vatican came back and said, "If you don't have the part in, we won't sanction the picture."
It stayed in the film.
Posted by William Connolly at 9:22 AM