Making THE FICKLE FINGER OF FATE 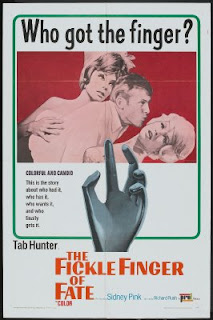 From: SO YOU WANT TO MAKE MOVIES
My Life As An Independent Film Producer
by Sidney Pink
In the other ring we had Tab Hunter and Dick Rush shooting FICKLE FINGER OF FATE. Dick and Tab arrived in Madrid after preliminary conversations in the States and were working before I had time to meet with them. Tab Hunter was one of the gayest of the gays I have ever met. I have worked with homosexuals all of my showbiz life since they are so much a part of that scene. Most of them are hard-working, talented people whose contribution to the arts has been phenomenal. Tab Hunter was different. He was most difficult to work with and threw fits when he did not get his way. He refused to accept Dick as the director and insisted on doing everything as he wanted it done. Things had become almost irreconcilable when I was called in.
The picture was scheduled to start on Monday, and it was the Thursday before when I got the SOS. I called Dick Rush, and he gave me the particulars of his problems with Tab. I immediately called a meeting for the three of us in my office to hear the facts presented from both points of view. Tab Hunter complained about his inability to communicate with his director, and I soon found his idea of communcation was to have everything his way. Dick on the other hand, was not secure enough in his own experience to handle a once well-known star with so many big films behind him.
I listended carefully to both sides before I exploded. I tore into Tab with a vengeance by advising him he was now working on a budget film with no time for temper tantrums. We had shooting schedules to be adhered to and there was no room for foolishness; we hired him as an actor and not as a director, so he would have to take direction as given. Any more recalcitrance on his part would result in my firing him, and he would never work again in Europe or America. The way I spoke brooked no argument and he left with the pouting look of a woman scorned, but we had no more problems with him thereafter. In fact, Tab is a damned good actor with a much better sense of comedy and timing than his namesake Jeff.
My troubles with FICKLE FINGER OF FATE continued, however, and I was called to the set on three different occasions to extricate Dick from problems he was unable to resolve. He is an extremely talented director, and I cannot comprehend why he never fully realized the promise he showed. I know he was highly praised for a picture he made with Peter O'Toole, THE STUNT MAN, but I always felt he would be one of the great directors. In any event, he finished THE FICKLE FINGER OF FATE on schedule and within budget, and we emerged with a very fine program picture that received good reviews and pleased its audiences.
Posted by William Connolly at 2:21 PM