Tab Hunter on THE FICKLE FINGER OF FATE 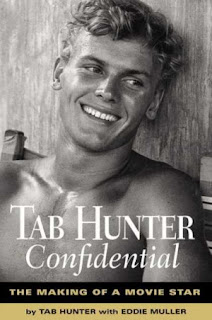 From: TAB HUNTER CONFIDENTIAL
The Making of A Movie Star
by Tab Hunter with Eddie Muller
When Neil and I arrived in Rome, my next new agent, Guiseppi Perrone, sent me straight to Spain for a western called THE CHRISTMAS KID. Arriving in Madrid, I ran into my old waterskiing pal from Lake Arrowhead, Jeffrey Hunter. We swapped stories of Watson Webb, with whom we'd both kept in touch. Jeff was there to make a thriller, THE CUP OF ST. SEBASTIAN. Over dinner and drinks that evening, we hatched a plan.
"What the hell?" we agreed. "The producers won't know Jeffrey Hunter from Tab Hunter. Let's switch movies!"
And we did. Jeff did the western, I did the thriller. No one was the wiser. Nobody was really paying much attention anyway during the production of THE CUP OF ST. SEBASTIAN, including the director, a young American named Richard Rush, who seemed to focus less on the film than on getting laid. To "protect" myself, I rewrote a lot of the screenplay, basically turning it from a lackluster thriller into a lackluster comedy, full of slapstick chases and cases of mistaken identity. When it was released in the United States, THE CUP OF ST. SEBASTIAN was retitled THE FICKLE FINGER OF FATE.
[Neal Noorlag was Tab's traveling companion at the time. As THE CHRISTMAS KID was shot after the production of FICKLE FINGER and after the production of WITCH WITHOUT A BROOM, Tab's version of events is more than suspect - as is his assertion that "the producers" wouldn't know Jeffrey from Tab. While trying to portray "the producers" as ignorant, he also diminishes both Jeffrey's and his credibility as "stars".]
Posted by William Connolly at 11:25 AM