Tab Hunter on THE GOLDEN ARROW 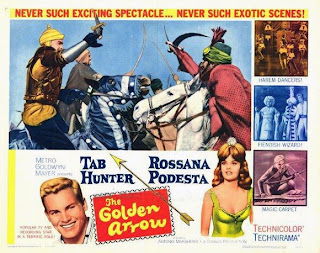 From: TAB HUNTER CONFIDENTIAL
The Making of A Movie Star
by Tab Hunter with Eddie Muller
Rossana Podesta draped herself against a date palm in the desert oasis. In her diaphanous gown, she oozed sex appeal. I tossed the loose end of the burnoose over my shoulder, adjusted my sword, and descended on her. She rose slightly, inviting my kiss.
A million flies swarmed into our hair, our eyes, our mouths. They were all over everything, everywhere.
"Cut!" screamed director Antonio Margheriti, in Italian, his native language.
We were on location in Egypt, shooting a sword-and-sandal spectacular for the Italian company, Titanus Studios. Margheriti stormed around, spewing lots of vowels, gesturing wildly at the mostly Egyptian crew.
"What's he saying?" I asked Rossana as we battled the insect invasion. Rossana, of course, spoke English. Six years earlier, at twenty-one, she'd won an international casting search to fill the title role in HELEN OF TROY, Warners' 1956 mythological extravaganza. The American experiment failed, and Rossana was now back home earning a living. After this, she'd make VIRGIN OF NUREMBERG.
"Antonio is asking how to say shit in Arabic," Rossana explained, spitting flies.
At times like this, I doubted the wisdom of putting everything I owned in storage, turning my horses out at a friend's farm in Northern California, and accepting the lead role in LA FRECCIA D'ORO, aka THE GOLDEN ARROW. Like the keys to the kingdom - you settle for an open door. Most of the films I'd made at the end of the 1950s had just come out in Europe; the name Tab Hunter still had marquee value across the Atlantic. So Dick Clayton set me up with the Kaufman and Lerner agency, a Rome-based representative of Famous Artists.
Thomas Milian, a friend who'd struggled for years as an actor in New York, was doing fabulously well making pictures in Italy. "Over here I'm a star," he'd written to me, noting that he was now officially "Tomas". He encouraged me to give the Italians a try. I'd loved Italy when I vacationed there, so I figured - why not get paid to go back?
Not being able to speak Italian wasn't a drawback. The script of LA FRECCIA D'ORO - my copy was the only one in English - featured page after page of truly horrendous dialogue. I played a bandit named Hassan who learns he's actually the son of the sultan. To earn my rightful place in the royal family, I must retrieve a magic amulet. All I could think of was Tony Curtis in THE PRINCE WHO WAS A THIEF: "Yonda lies da castle of my fadda." I spent every night in my hotel rewriting my lines so I'd at least have fun delivering them. I camped it up shamelessly. Not that it mattered - all my dialogue was eventually dubbed by a stiff-as-a-board Italian baritone with no sense of humor. I ended up sounding like Rossano Brazzi.
Disappointment over being stuck in a stinker was eased considerably by weekly infusions of cash, delivered personally by the production manager. I'd sign a voucher and he'd hand over a bundle of lire, some of the old notes as big as place mats. On top of that, Kaufman and Lerner had gotten me a nice stipend for weekly living expenses. A simple, old-fashioned way of doing business, which I appreciated.
This wasn't a fly-by-night production. Titanus Studios spared no expense. Wardrobe fittings alone took two weeks, with every costume made to order. The Italians kept leisurely production schedules. It gave me plenty of time to sightsee, in both Rome and Egypt. It did, however, make it harder to save my lire, which I needed to stockpile if I was ever to get out of hock to Jack Warner.
Bugs notwithstanding, LA FRECCIA D'ORO was a fun shoot. How could I not love racing a purebred Arab across the desert, hamming it up like Errol Flynn? Unfortunately, horseback riding wasn't my sole mode of transportation in this film. The other was a flying carpet. But LA FRECCIA D'ORO was not THIEF OF BAGHDAD.
Considering what he had to work with, Antonio Margheriti wasn't a bad director. He worshipped American movies and didn't seem to care how lousy the material was, as long as he could follow in the boots of his boyhood idols. Sporting a ten-gallon cowboy hat and a five-gallon belly, he'd ride up on his horse, rein in, and say, "Very John Wayne, no?"
That was about the extent of his English. We tried to make script improvements, through an interpreter, but at a certain point I just gave in and accepted that there was no pony under the pile of shit. LA FRECCIA D'ORO's overextended budget ended up sinking Titanus, at least temporarily. Margheriti, however, landed on his feet - renamed Tony Dawson. While "Tomas" Milian became an honorary Italian, Antonio Margheriti became the American he'd always wanted to be. It was like a cinematic cultural-exchange program. Under his new Hollywood name, Margheriti would grind out four decades' worth of profitably dreck like DEVIL OF THE DESERT AGAINST THE SON OF HERCULES, MR. SUPERINVISIBLE, and CANNIBAL APOCALYPSE. "Tony" would have a long, successful career knocking off popular films of every genre.
[I don't know how bad a blow THE GOLDEN ARROW was to Titanus, but what really crippled it was SODOM AND GOMORRAH, directed by Robert Aldrich. And Antonio Margheriti was never billed as "Tony Dawson" but rather "Anthony Dawson" - which happened to also be the name of an British actor.]
Posted by William Connolly at 5:56 AM