Marlon Brando on Gillo Pontecorvo and LAST TANGO IN PARIS 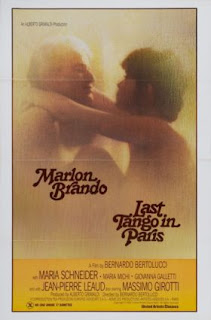 From: Marlon Brando: The Godfather Roars
by Chris Hodenfield
Rolling Stone May 20, 1976
"Kazan is a performer's director," he said suddenly. "The best director I ever worked with. Because most actors... it's very lonely out there. Most actors don't get any help from directors. Emotional help, if you're playing an emotional part. Kazan is the only one I know who really gives you help.
"Most of the time you just come like a journeyman plumber and you gotta have your own bag of stuff, ready to go. But the people who perceive most delicately are Bertolucci and Gillo Pontecorvo [BURN!]...
"Shakespeare said something that was remarkable. You don't hear it very often. He said, 'There is no art that finds the mind's construction on the face.' Meaning that there is the art of poetry, music or dancing, architecture or painting, whatever. But to find people's minds by their face, especially their face, is an art and it's not recognized as an art.
"Bertolucci has that and so does Gillo Pontecorvo. Gadge [Kazan] also knows when things are in and when they're out. Has a good feeling. He works viscerally and on instinct. Bertolucci is extraordinary in his ability to perceive... he's a poet. Some directors are difficult to work for. Gillo is very difficult to work for, very highly disciplined. But Bertolucci is easy to work for."
Different intuitions? Different manipulations?
"Definitely. Gillo has a very stringent and disciplined technique. Kazan would say, 'Go out and rehearse this scene and bring me something back.' He'll take about eight points out of twelve or eleven, andyou argue with him. He'll give you points and there's no ego involved. He's a guy that works without ego.
"There might be a difference of interpretation. But he's got the last word on that. That's the director's privilege. And they'll always beat you to the tape in the cutting room. You might say 'yeah' quick. But if you thought about it and said, '..... Yeeeeah.' Maybe he thought that was too goddamn long a take, so in the cutting room he dropped out thirty-eight frames and it comes out '..... Yeah.' Which alters the meaning. But if you're tight with the director, you know what they're after."
I asked him if the LAST TANGO (IN PARIS) details were autobiographical.
"Oh, well he [Bertolucci] had some cockamamie notion. What he wanted to do was sort of meld the image of the actor, the performer, with the part. So he got a few extraneous details. Played the drums. I don't know... Tahiti... so that the man is really telling the story of his life. I don't know what the hell it's supposed to mean. He said, 'Give me some reminiscences about your youth.' That made me think about milking a cow, my mother's getting drunk, one thing and another. He went, 'Wonderful, wonderful.'...
"It wasn't an easy film. Playing it in another language was hard, and in a way it was easy because I just made up any goddamn thing. Not anything, just sorta he wanted this theme or that theme. No matter what you did, within a given context,he leaves you alone."
He ruminated on a distant cloud. He jaw flexed.
"I don't think Bertolucci knew what the film was about. And I didn't know what it was about. He went around telling everybody it was about his prick!"
The laugh sounded like an asthma attack. "He looks at me one day and he says, you know... something like, 'You are the embodiment, or reincarnation... you are the... symbol of my prick.' I mean, what the fuck does that mean? He has some conflicts that he's quite open about...
"I have no idea what the picture was about. I mean most pictures are the extensions of people's fantasies. You learn more about the reviewer when they review. A good reviewer anyway, like Pauline Kael. I think she overwrote the picture because she was overwhelmed by some personal experience she had."
What did you see in the movie?
"I saw the picture about two years later. No, it was three years later, and I thought it was funny. I didn't know what it was about." He gazed emptily at the ceiling. "It was about a man desperately trying to find some meaning in life, full of odd symbols. He dies in a self-conscious way, in a fetal position. The woman shoots him at the end, and this whole thing was to have taken place over a three-day period. Impossible to have those transitions. It's a mythological tale; it doesn't happen in life."
His eyes unfocused. "It was fascinating, that tango scene... in contrast to those strange men and movements and people. Iconoclastic. But you do something... the idea that he simply wanted to revert to his nature, he wanted to find out what was the common denominator in his misery, what his nature is... and then he found that his nature is not what he thought it was. And as soon as he reverted to a more natural way, meaning a more bourgeois concept, then she finally became more savage and primitive on an unconscious level. Finally killed him. He was sort of threatening her. Maybe it's..."
He realized what a mouthful had passed, considering that he didn't know what the film was about. His gaze shifted out the window with a certain amount of disgust. "I don't know."
Did you catch Ingmar Bergman's remark?
"No, what he say?"
He saw Jeanne as a boy, that Bertolucci didn't have the nerve to cast a boy in Maria Schneider's role.
"Oh. Well, he came as close to it as he can get. I mean, she's a professed...homosexual."
There were a lot of rugged stories around that movie, that it was an emotional pounding, that you'd never do anything like that again, that it took some recovery time.
"Naaah. As soon as they let go of your leg, then it's out to Tahiti or the desert."
Posted by William Connolly at 6:53 AM