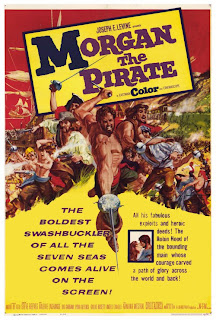 From: DE TOTH ON DE TOTH
by Anthony Slide
After his excursion into television, de Toth did not return to American films, but instead followed the road to Rome taken by other American film-makers at the time. There he directed features, among them: MORGAN IL PIRATA (MORGAN THE PIRATE, 1961), MONGOLI (THE MONGOLS, 1961) and ORO PER I CAESARI (GOLD FOR THE CAESARS, 1962). An Italian co-director was credited to each film in order to qualify for government subsidies, yet Andre would not have minded if these co-directors had taken full credit. The Italian productions did little for his reputation and were more an excuse to enjoy the good life in Rome.
SLIDE: For the next two or three years, you travel a lot. You go to Italy to make MORGAN THE PIRATE.
DE TOTH: I made fourteen television shows in eight months, or something like that. Jesus! I just wanted a mental shower.
(In television) many directors are nothing more than traffic cops.
Oh... I don't know... It was new, then, and exciting for me, especially working with Sam Peckinpah on The Westerner.
What did Peckinpah do on the show?
He produced and wrote it. The first time I worked on a TV script was with Sam Peckinpah. We liked each other and had a ball. And that ball as wet.
If you liked working with Peckinpah so much, why did you leave him and television to go to Italy?
I didn't want to get stuck in Hollywood's TV quagmire, the pit of typecasting. Italy was a vacation, taking a breather between climbing new peaks. Unfortunately, I climbed the wrong one, and when I skied down one of the Swiss Alps, I broke my neck. And that wasn't on the schedule.
Did you find it difficult dealing with the Italian technique of post-syncing dialogue, rather than recording live sound?
I didn't post-synch. They post-synced themselves for the Italian version. I shot the films in English.
All the cast could speak English?
All who played major parts. For the few who didn't, I had standby English-speaking actors and actresses on the sets, watching the scenes, and the moment I made a print, they came on, while the movements, the gestures, the rhythm of the scene was fresh in their memory, replayed the scene in English with the English-speaking characters. It worked. Not 100 per cent, of course, but the scenes were alive; they had the same atmosphere. It's not the most economical way of going about it, but I found it most effective. And nobody has used this technique before or since, as far as I know. If you, unwisely, find yourself in the same mess, and there isn't any up-to-date post-synch facility at your disposal, try it, Herr Future Director, I have no copyright on it. Bon chance!
What of your actors? Steve Reeves in MORGAN THE PIRATE, Jack Palance in THE MONGOLS...
Reeves was a very nice gentleman. And, of course, Jack Palance is a prince.
And you had Ron Randall and Jeffrey Hunter in GOLD FOR THE CAESARS.
I loved Italy, I loved them and the dolce vita. I did what I could, I was up front, I didn't hoodwink them or myself. Those films served them and were good for me as an experiment.
The last Italian film was GOLD FOR THE CAESARS in 1962, and then there is a long break until PLAY DIRTY. Why is that?
There sure was a break. I broke my neck for the first time.
Were you really as down then as some of the gossip columnists would have one believe. Can I quote one of them?
If it's bad, sure.
Here's James Bacon in the HOLLYWOOD REPORTER. I guess he must have been a friend of yours. Maybe he isn't after you hear this. He says, 'Andre is just about washed up mentally, physically and emotionally.' Is that how you felt?
No, but I understand, they have to write something, and thank God happiness is not news. Those little things don't bother me. I broke my neck twice since, and that didn't bother me either, I am still here, so... I kept on writing - that's wrong, not writing, dictating screenplays when I was totally paralyzed. They were mostly for Germany. They paid the bills for the de luxe Swiss sanatorium where I was 'washed up mentally, physically and emotionally'. Can't you see, I'm still crying.
Posted by William Connolly at 6:23 AM