Sidney in trouble with THE CHRISTMAS KID 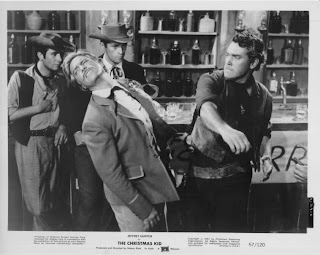 From: SO YOU WANT TO MAKE MOVIES
My Life As An Independent Film Producer
by Sidney Pink
Madrid was still buzzing with activity. Bronston was doing the mammoth BATTLE OF THE BULGE, bringing many of Europe's finest actors and technicians to Madrid, and we were busy wrapping up our first four pictures and preparing five more. I was tied up trying to get the answer print of THE TALL WOMEN while at the same time final-cutting FICKLE FINGER OF FATE and WITCH WITHOUT A BROOM. Elorietta, who was eager for more action, began preparing his next three productions, with PANCHO VILLA scheduled next.
[BATTLE OF THE BULGE was not made by Samuel Bronston, but by the survivors of his bankrupted company - in particular producer Philip Yordan. And the Elorietta film was called THE VENGEANCE OF PANCHO VILLA.]
Jeff Hunter finished his part in WITCH WITHOUT A BROOM and was now on his two-week hiatus, awaiting the final script of THE CHRISTMAS KID, and I didn't have even a page of it. Worse than not having a script, I had no director. I talked to every decent director in Spain as well as some Italians with experience directing Westerns, but no one would touch a Western based on the life of Jesus. I raised hell with Henaghan about the script, and he kept on with his promises until he finally did show up with the opening scene written up.
It was a story of a young blacksmith and his wife traveling west to find a homestead in the Colorado Territory. The wife is pregnant, due any day, and the time is Christmas Eve. They are making their way to their next overnight stop when their wagon loses a wheel. Forced to stop until the husband can repair it, she does into labor and he has to deliver the child himself. He rushes them to the closest shelter, a deserted stable on the outskirts of a town, and there she becomes critically ill. Frantic, he screams for help, and his shouts are heard by three of the town fathers on their way back from a hunting trip. These three wise men - a lawyer, a doctor, and a lawman - respond to his call and try to help. The doctor tries in vain to save her, the woman dies. The father, engulfed in guilt, blames the baby for the death of its mother and refuses to have anything more to do with it. The baby is a boy, and when the father refuses to give him a name, the three men take him under their care. They name him The Christmas Kid because he was born on Christmas day.
That was as much as Jim had been able to write, and when he came to present these opening pages, he demanded that his German girlfriend Katia be cast as the mother. When I refused, he angrily threw the pages at me and said, "You write the damned thing; you won't get another line out of me!" and stormed out of the office. I learned later that he knew I would never permit Katia to play a role in any of my films; he used this approach to get out of a commitment he was unable to meet. He hadn't the foggiest idea of how to develop the story or script, and after procrastinating as long as he could, he picked a fight with me in order to make it appear I was responsible for the mess he left me in.
What a snafu! Westinghouse accepted the title and the idea of a Western based on the life of Jesus: the fact that Henaghan was the writer allowed WBC the luxury of accepting the project without the usual precautions. Now I had no script, no story, and no idea what to do. Jeff Hunter was on a play-or-pay contract, and I also had a contract with Louis Hayward for the same picture. I had no director - every attempt to find one failed - and I had to begin production in less than three weeks. If that wasn't enough, I was in the midst of editing two pictures and preparing four more. That was one of the very few times in my life when I contemplated suicide, or murder. I was unable to confide in anyone at Westinghouse, and so once again I followed the Cagney principle.
[In 1937, Pink worked for Grand National and met James Cagney who made two pictures with that independent studio while on the outs with Warner Bros. Pink says that Cagney taught him the credo "damn the torpedoes, full speed ahead."]
Posted by William Connolly at 8:56 AM