THE CHRISTMAS KID clinched the demise of Howard Barnes 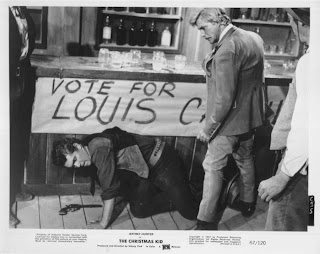 From: SO YOU WANT TO MAKE MOVIES
My Life As An Independent Film Producer
by Sidney Pink
Throughout my youth I never possessed much material wealth to lose; consequently, drastic moves and big decisions were easy to make. Without a big ante in the game, it is easy to play, so I did things instinctively and quickly, even foolishly and impetuously. The Westinghouse contract gave me a prestige I had never known before, and I liked the feeling of importance. Things I previously scoffed at were now important considerations to be studied and restudied before making a decision.
Something else was on my mind, too. I didn't know whether the Westinghouse alliance gave me the respect I now received in the showbiz world, or if it was earned by my own efforts and abilities. In spite of the cocky attitude I have always worn on the outside, I have never been fully convinced I possess any real talent. I also know these same self-doubts have plagued many of my friends and colleagues who, with so much more talent than I, should have realized the depth of their own abilities...
Arnold reported that preliminary discussions with Don McGannon indicated that Don did not share the views of Dick Pack. Pack expressed the opinion I was trying to cheat Westinghouse by creating falsely inflated budgets to back up claims of excessive costs created by WBC's demands for unneeded script revisions and cast changes. In Arnold's opinion, McGannon was so pleased with the pictures he had seen that a new deal could be structured. Peter agreed with Arnold; he was certain Pack would have to back our position when he realized the total satisfaction of his boss McGannon.
This was great to hear, but it was based purely on Arnold and Peter's own opinion and analysis. Much as I respected their abilities, I had to make my own evaluation before moving ahead. I was cautioned by Arnold to be very careful about anything I said to either Pack or Barnes that might in any way impugn future dealings with McGannon. I made an appointment with Dick and Howard to deliver the new scripts and to avoid breaching our present contract, as well as to demonstrate I did not intend to quit.
After a lengthy discussion of future scripts, I left with the feeling my advisors were right. Pack was friendlier than at any time since we first met, but I knew he had not changed his inherent dislike of my creative independence. I suggested, in Barnes' presence, that I felt it would be better for all if Howard could be assigned to the other WBC films, and Dick promised to consider it.
I was not certain I had won anything until after the screening of THE CHRISTMAS KID. The WBC syndication department attended, as did Paul Rosen, the Gettinger office, and assorted agents from Ashley Famous. From Howard's preliminary reports, Don and Dick were expecting to see a real bomb, and I think perhaps that colored their final reaction to the film. Never had anyone been proven so wrong and prejudice-ridden as Howard Barnes. The reaction to the picture was enthusiastically positive on the part of everyone, and it cemented my relationship with Paul Rosen, who was impressed with the production values we were able to put on the screen despite our small budgets. THE CHRISTMAS KID also clinched the demise of Howard Barnes; Dick replaced him shortly thereafter.
Posted by William Connolly at 6:06 AM