In praise of Brittany Murphy 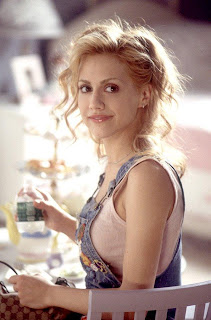 I had seen Brittany Murphy in CLUELESS, but didn't really notice her until the bus stop posters for JUST MARRIED appeared. When I realized that I had seen her a few years before looking very different, I wondered "what happened?" Then I saw her in CHERRY FALLS and was mightily impressed by her unique persona and how moving I found her performance. Like Mia Kirshner, she can be greatly affecting as she seems to be just on the verge of crying. I started to look for other shows featuring her, and found myself impressed by her again and again - in BONGWATER, FALLING SKY, THE DEVIL'S ARITHMETIC, DROP DEAD GORGEOUS, FREEWAY, an episode of Unscripted on HBO and especially opposite Dakota Fanning in the charming UPTOWN GIRLS. After being less impressed by her in SIN CITY, NEVERWAS and especially in the SyFy Channel MEGA FAULT - in which she again looked very different from how she looked before, I was hoping that she would overcome whatever was going on in her life and once again do something impressive. Unfortunately, her life came to an abrupt end Sunday, December 20, 2009.
I, however, haven't caught up with everything she has already made, so I have much more to see of her and I am certain to find more of that impressive stuff for which I became a fan.
Posted by William Connolly at 7:24 AM