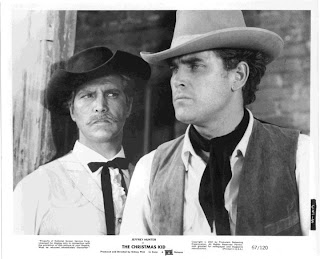 From: SO YOU WANT TO MAKE MOVIES
My Life As An Independent Film Producer
by Sidney Pink
Unfortunately, Jeff Hunter and his girlfriend had a fight during the first week of production and he started drinking, making the film more difficult than it should have been. Jeff was so drunk one day he couldnt' speak even the simplest lines, and he became abusive and beligerent. I liked Jeff Hunter; normally he was as gentle as a puppy, but when he got drunk, he became frighteningly mean. He had now disrupted any possibility of work for the rest of the day, and perhaps had ruined any hope for the picture. It was time for me to take action, so I did.~I shouted even louder than he and I gave him an ultimatum. Either he went back to his apartment and sobered up, after giving us his solemn word of honor not to drink again during the shooting of the movie, or I would be forced to fire him right then and there. If I had to do that, I would also file charges against him with the Screen Actors Guild that would keep him from working again until he repaid all damages caused by his behavior. I also reminded him he was a visitor in a foreign country and making us all look like ugly Americans. I asked him to consider how ashamed he would be after he sobered up, and I managed to get through to him. He understood what I was shouting at him, and he sat down and asked that he be allowed to continue on the picture. He gave us his solemn promise not to drink again.
From that day until we finished shooting, Jeff never touched a drop. We finished the picture three days ahead of schedule and below budget. We promised the crew they could have the entire day off to see the world championship soccer game being played in Madrid if they would help us finish our big scene, the burning of the saloon, in a night sequence. THE CHRISTMAS KID was shot in exactly sixteen working days, without a complete script or rehearsal, yet it still turned out to be one of our most critically acclaimed pictures. We had a magnificent cast that included not only Jeff Hunter and Louis Hayward but also Perla Cristal as the beauty, Gustavo Rojo as the lawman turned mayor, Luis Prendes as the judge, Fernando Hilbeck as Jud (Judas), and all of our American Pink Players. It will always be a truism that "a movie that works is a movie that has a happy crew," and outside of the minor fracas with Jeff, we had exactly that. It was a joyful experience and it showed on film. I had begun by hating Jim Henaghan and I ended up grateful to him because I had been able to test my own abilities.
I am indebted to THE CHRISTMAS KID for making my life much more tolerable by removing Howard Barnes from the situation. Howard learned I was writing the scenes of the script the night before they were shot and that Jeff had begun drinking again. Howard became thoroughly convinced the picture would be a bomb, so without seeing any of it, he began writing reports to New York about the inferior quality of the picture. He built up such a strong image of its inadequacies that Pack was ready to exercise his right to reject without even seeing the film.
I knew nothing about this, as usual, until I finished production and was ready to edit. Then Dick called me with the news he was going to reject the picture on Howard's recommendation. Accepting his decision, I reminded Dick I was now at liberty to sell the picture elsewhere without any further commitment to show the film to Westinghouse. When Pack heard this, he realized he might be losing something, as he was always free to reject a film after seeing it. He could not understand why I wasn't the slightest bit perturbed with his decision. I didn't try to change his mind or even discuss the matter, so he changed his own mind and decided he was acting prematurely.
I believe this was when Dick realized Howard Barnes could never really function as his representative with our company. Barnes was consumed with a desire to destroy our relationship with Westinghouse and was no longer able to look at things objectively. Anything I did would be unacceptable to him, whether the end product was good or bad. I put John Horvath in charge of cutting THE CHRISTMAS KID while I turned to other problems, including the final answer print of THE TALL WOMEN.
Posted by William Connolly at 6:40 AM