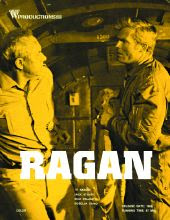 From: SO YOU WANT TO MAKE MOVIES
My Life As An Independent Producer
by Sidney Pink
The character of Madigan required an older actor, someone associated with gangster roles and preferably to fill the desires of WBC, a name actor. Paul Rosen suggested George Raft for the part, and there was unanimous agreement. He was perfect casting and fit every possible need for all of us. At eighty, George was still one of the most recognized names in Hollywood and certainly there was no one more associated with gangster roles than he. Not even the immortal Edward G. Robinson was more famous.
Predictably, Pack was on cloud ninety-nine when this casting possibility arose. Paul tracked down George, who was then connected with one of the famous London gambling clubs, and he agreed to accept the part. With George Raft signed, we were off to an auspicious start for the new Westinghouse contract.
It was Dick Pack who cast RAGAN for us. He wanted to find a vehicle for Ty Hardin, who was in Spain doing BATTLE OF THE BULGE. Ty made a name for himself in television with a western series and of course this sat well with Dick. Ty was a real ladies' man - blond, tall, very virile-looking with a grin like young Gary Cooper's. He fell in love with Europe, especially Rome and Madrid, along with the apparently inexhaustible supply of young lovelies who shared his innumerable one-night stands.
Ty was a great personality and a charmer but no actor. I was almost reluctant to go with him as the leading man in a picture with only one lead, but Dick Pack was so insistent that I finally agreed. Since I was able to create a very unusual villain role that would co-star the always trustworthy Gustavo Rojo, that satisfied me. Paul couldn't find an American director who would accept the script, so I was forced to find one in Europe.
The problem of a suitable leading man for MADIGAN was haunting all of us, and I knew I couldn't leave New York without completing the cast. In desperation I called Jack Gilardi and Mark Newman, hoping they could help find someone who fit our vision of the part. Stanley Prager tried to get Alan Arkin to do it, but he passed after reading the script. He rightfully felt it was improper casting for him. He had not yet made a real name for himself, but he had a good mind for scripts then, and I cannot understand what has prompted him to do some of the losers he has appeared in recently.
While we were awaiting some news from the West Coast, Paul Rosen snared another good name for us to play the lead with Bosley in THE BANG-BANG KID. Guy Madison became a star under the aegis of Warner Bros., appearing in such box-office hits as THE CHARGE AT FEATHER RIVER, and was now a familiar name in the Hollywood star list. But in the midst of that soaring career, he abruptly left for Europe and took starring roles in the spaghetti westerns and potboilers being shot in Rome. He was in great demand there because his name was virtually assured a worldwide release. Paul felt he would be perfect in the role of Bear Bullock, and who could argue that point? We signed him, and now we had our final casting for THE BANG-BANG KID except for the female lead, who had to be European.
Posted by William Connolly at 7:05 AM