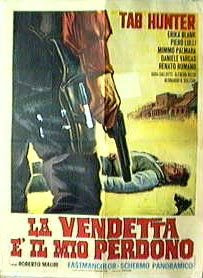 From: TAB HUNTER CONFIDENTIAL
The Making of A Movie Star
by Tab Hunter with Eddie Muller
LA VENDETTA E IL MIO PERDONO (SHOTGUN in North America) was a spaghetti western shot on meat sauce. We worked long, hard hours at a tiny studio in Rome, and Neal even had a small role. whetting his appetite for acting. Fellini was shooting next door, parading carnival freaks and gypsies through the soundstages all day long.
I became friends with Marina Cidogna, whom I'd met years earlier at Visconti's villa. She was a successful film producer now, who'd learned moviemaking in Hollywood as a protege of David O. Selznick. She was in pre-production on I GIOVANI TIGRI starring the handsome Austrian actor Helmut Berger. Not to put too fine a point on it, but Berger was a Continental version of Tab Hunter, a young, unschooled actor exploited for his handsome features, still learning his craft as he was thrust into the limelight.
Marina had a breathtakingly beautiful Brazilian girlfriend by the name of Florinda Bolkin. Over dinner one evening, Marina asked if I'd appear with Florinda in her screen test, to be directed by her good friend...Luchino Visconti. I leaped at the chance.
After spending the day shooting a disjointed western, I'd be picked up by Visconti's chauffer, who'd wisk me to another soundstage across town, where I'd put in a few more hours working with Florinda and the Master. After that, I'd join Florinda, Helmut, and another Brazilian actor, Carlos de Castro, roaring through Rome in a Cadillac convertible that belonged to Carlos's boyfriend, Arndt Krupp, scion of the German industrialist family that supplied the Nazis all their munitions. Even in Rome, a city as wide open and sultry as an elegant whore, this group could stop traffic, anytime, anywhere.
Europe in the sixties was a heady place, sexy and decadent, which is as good a description as any, I guess, of the brief indulgence Helmut and I shared. I rarely resisted such temptations, even though I was with Neal. I'd developed the ability to compartmentalize the sexual aspect of my character, a trait I shared with a lot of Catholics. I may not have denied myself much, but I could always later deny, at least in my own mind, what I'd done.
Posted by William Connolly at 6:04 AM