Sidney has no script for THE CHRISTMAS KID. 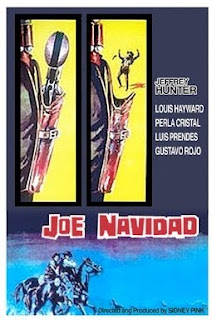 From: SO YOU WANT TO MAKE MOVIES
My Life As An Independent Film Producer
by Sidney Pink
I hired Spain's foremost cutter, Antonio Ramirez, to take charge of the cutting rooms, and I rehired Antonio Sau to take command of production and relieve me of production decisions. Then I rolled up the sleeves of my sleeveless shirts, increased my smoking habit to four packs a day, and directed THE CHRISTMAS KID myself.
In a Catholic country I didn't dare follow the Jesus parable too closely, so I had Luis de los Arcos write up a brief, inoffensive script that bore an equally innocuous title JOE NAVIDAD ("JOE CHRISTMAS"). He wrote this script in three days, and it took three more days to get censor approval and our shooting permit.
In the meantime, I put every available member of our production staff to work in setting up our production requirements. We had neither the time nor the money for elaborate production or big battle scenes. We couldn't even use Indians. What remained was the story I now had to write.
I decided all the action would take place within the confines of the small town of Jasper in the Wyoming Territory and would culminate in a confrontation between good and evil. I decided to cast Louis Hayward as the devil, this time in the person of an ever-smiling, evil gambler who comes to Jasper after a copper strike has made the town rich. I portrayed Joe Christmas, played by Jeff Hunter, as the renegade son of the town drunk, who holds his son responsible for the death of his mother. Joe's upbringing and education are left to the three wise men who try to impart to him the best of their wisdom and the love he finds nowhere else. Joe grows up with the same hate in him that his father carries, and with a total disrespect for all he has been taught...
This is how the story evolved, but I was unable to write it before we started shooting. I hired an English-speaking assitant, Enrique Bergiere, and my son as dialogue director. We never left the Western movie set the Italians built in the outskirts of Madrid for their many spaghetti Westerns. We used it as the only background for the action, which allowed us tight control of the shooting schedule and budget. It was the easiest film I ever shot, and except for the difficulty of writing new scenes and dialogue every night and giving them to the actors the same day they were to be shot, it was almost like child's play.
Posted by William Connolly at 8:09 AM