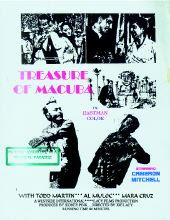 From: SO YOU WANT TO MAKE MOVIES
My Life As An Independent Film Producer
by Sidney Pink
I was not anxious to begin talks with Westinghouse. Our strategy was to continue production plans and wait the next move. I had plenty to keep me busy casting THE BANG-BANG KID, A THOUSAND AND ONE NIGHTS, RAGAN, TREASURE OF MAKUBA, and EMERALD OF ARTATAMA. Also, I wanted to find some really good American directors in an effort to achieve that most elusive goal, a truly great movie. I knew my own limitations made that feat impossible for me to achieve as producer-director, but my ambition was to have my name on at least one truly memorable film. I believe that McGannon and Pack were totally aware of our waiting strategy and adopted the same tactic; thus we were at a standstill for several weeks. Paul Rosen was reading our properties and was most interested in THE BANG-BANG KID and MADIGAN'S MILLIONS. He set about trying to cast these two first.
For the MADIGAN lead he presented a variety of choices. I interviewed Dick Shawn, Robert Redford (then an unknown), and Jackie Mason, whom I found thoroughly repulsive in my visit with him at his room in the old Astor Hotel. Dick Shawn would have been great, but his ambitions were not for movie stardom, and he evinced very little interest in a European trip. I understood his needs were not the same as most actors, and I respected him for his candor; I still believe the great talent of this fine comedian was never really tapped. I never got to speak to Redford who, in my poor judgement and lack of good sense, I found to be too handsome for the role.
Unable to agree on anyone for the lead, we began looking for a director. Paul recommended two fine young Broadway directors who had never made films. He was particularly high on a young comedian-straight-man-actor, Mike Nichols, who was a huge success on Broadway. Mike was eager to make a movie and he was very impressive. He knew actors and he knew scripts, but what I failed to discern was his amazing capacity for learning quickly and his innate ability to visualize the potential of any medium he was working with. I was impressed but afraid to take a chance on him.
The other director, Stanley Prager, was a graduate of the Yiddish theater, a member of that great talent pool that included Neil Simon, Woody Allen, Mel Brooks, Carl Reiner and others. Stanley's latest Broadway effort, Woody Allen's very funny PLEASE DON'T DRINK THE WATER, was breaking all records. Stanley gave us passes to see the show, and his comedic direction was sure-fire.
MADIGAN was essentially a comedy drama and could only be helped by a comedy director, so I was in a real dilemma. I liked and respected both Nichols and Prager, yet I could use only one direction. Paul resolved my indecision when he showed me an award-winning television play starring Alan Arkin that Stanley had directed on film. It was titled THE PRIVATE LIFE OF BARNEY RUDITZKY and was a damned good show. I was so impressed I signed Stanley Prager to a two-picture contract at the highest figure I had ever paid a director: $20,000 per film. It was a grave error, but I didn't learn that until much later when we began production of MADIGAN'S MILLIONS. It seems I do have a claim to fame. How many other people can claim the stupidity of turning down both Mike Nichols and Robert Redford for the same movie? My name should be reserved in the Motion Picture Idiot Hall of Fame.
Posted by William Connolly at 7:44 AM