Sidney finds that it sometimes pays to be a producer. 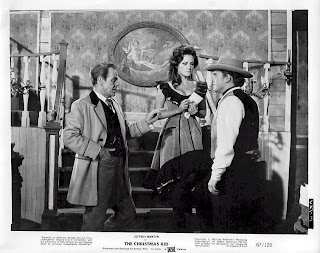 From: SO YOU WANT TO MAKE MOVIES
My Life As An Independent Film Producer
by Sidney Pink
THE CHRISTMAS KID was a mess. The normal orderliness of the filing and storage of takes and prints had been completely fouled up by the two assistants that John was supposedly training. Takes had been mislabeled, scene numbers and clappers had disappeared, and chaos was the order of the day. I called in Antonio Ramirez and requested he identify every scene that was either unmarked or unrecognizable and get the cutting room back in order so that we could start again from scratch.
It took a week to get reorganized, which gave me time to realize my deal with Westinghouse was not good for us. An analysis of the WBC contribution to our budget disclosed we were actually paying more for the prerequisite contract demands than Westinghouse was paying us. The cost of meeting WBC's standards was well in excess of the $90,000 paid to us, without the added headaches caused by Barnes and Pack.
I called Arnold in New York to explain the figures to him. After a long exchange of opinions (the bill for that one call was over $600), we agreed that Peter and he would contact McGannon and set up an appointment to re-evaluate the deal. We had now delivered the first six pictures, and I felt it was a proper time to discuss and evaluate the contract from the viewpoint of both parties. I needed at least four weeks to finish and deliver THE CHRISTMAS KID which gave us the last of the six.
John Horvath returned and gave as his excuse for leaving that his first citizenship papers did not permit him to remain out of the States longer than five months at one time. He was required to return to the U.S. for a minimum of forty-eight hours before he was permitted to leave again. He admitted he had taken extra time to be with his girlfriend whom he had finally decided to marry. He told me he was not happy with the responsibility of being in charge; he preferred the role of assistant. Regretfully I refused his requests, and so he would have to return to New York with his new bride. I offered him financial help if he needed it.
Henaghan came to me with a new script called MADIGAN'S MILLIONS and the hope that we were still speaking. This was Jimmy's way of apologizing, and I recognized it. His Irish pride would never permit an admission of error, but he knew I knew and so all was well. MADIGAN was a good script and I bought it.
I invited Jim to attend a screening of the new first cut of THE CHRISTMAS KID. We held it secretly at the Fono Espana room. It was still rough, with a seperate soundtrack, but it was looking good. We finally were able to put the film together with the feeling and tempo with which I had shot it. Henaghan admitted the film was turning out far better than his original ideal, imparting a flavor he had never seen in a Western.
Later, reviews and audience reaction confirmed that we had produced a new kind of Western, and I am proud of it. Louis Hayward was pleased with his performance, and although Jeff never personally told me this, his girlfriend phoned me soon after his untimely death to tell me Jeff considered his performance in THE CHRISTMAS KID one of his best, and he had enjoyed his stay in Madrid with us. Sometimes it pays to be a producer.
Posted by William Connolly at 6:06 AM