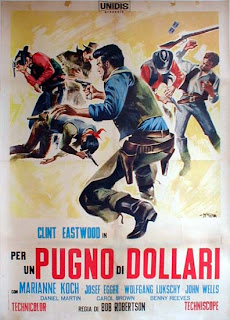 From: Tony Russel Our Man On Gamma 1
The Wild Wild Interview
by Michael Barnum
Video Watchdog No. 128 Dec/Feb 2007
Legend has it that you were one of the actors, along with Steve Reeves and Richard Harrison, approached by Sergio Leone to star in A FISTFUL OF DOLLARS.
Yes, I turned down A FISTFUL OF DOLLARS because the script was so terrible. I had already done some swashbuckling action pictures on horses and all of that stuff when Sergio Leone contacted my agent and told him that he wanted to see me for his movie. Leone told my agent that he wanted to do this Western, and I sort of giggled under my breath. I couldn't imagine Italians doing a Western! We asked to see the script and we each took a copy home. Later, my agent called me and said, "Did you read this?" I told him it was the worst thing I had ever read [laughs]. I was looking for dialogue and motivation, and moment-to-moment, and all that crap. Reading the script, I never saw the blood or heard the music, or got any of the stuff that ended up making that film so great. Well, I turned it down; my agent had said that they weren't paying the actors much money for it anyway. He then told me to come over to his office and meet a good director named Duccio Tessari, who was going to do a movie in Egypt. It was to be a tongue-in-cheek James Bond thing.
[So the running tally of people who could have worked on A FISTFUL OF DOLLARS includes: Richard Harrison, Steve Reeves, Henry Fonda, Charles Bronson, James Coburn, Sidney Pink (who had just made FINGER ON THE TRIGGER), Frank Wolff and, mentioned during a speech at a Golden Boot Awards ceremony - Stuart Whitman. -wtc]
That would be SECRET OF THE SPHINX [LA SFINGE SORRIDE PRIMA DI MORIRE-STOP-LONDRA, 1964].
Yes. I read the script and sort of liked it, and I had been wanting to go to Egypt, so I accepted that one. Meanwhile, Clint Eastwood was hired to do A FISTFUL OF DOLLARS. I knew Clint and I knew what they paid him for that movie, which was next to nothing. But, of course, the next time he worked for Leone, they paid him $150,000 and the rest is history!
Do you have any idea how Clint Eastwood felt about A FISTFUL OF DOLLARS?
I saw him right after he'd finished shooting the picture and he said to me, "Tony, I've just made the biggest piece of crap that I've ever done in my life. It's really terrible and they didn't pay me much money and the money was never there when I needed it, and it was 120 degrees..." He bitched and bitched and bitched [laughs]! But the film played to Standing Room Only for about six months at the biggest theater in Rome.
Do you think that film would have changed the direction of your career, the way it did for Clint Eastwood?
Clint was much more ambitious than I was, and he wanted to eventually do other things, such as direct. I would guess that, if I'd made the film, it would still have been a successful picture, but I'd have probably just taken the money and run. Clint got into the right circles. It really is a matter of ambition, sometimes. I enjoyed acting, but I had no urge to produce or direct. I don't think it was just Clint's performance that made the picture; it was Sergio Leone's direction, and the score, and everything connected.
Posted by William Connolly at 6:22 AM