Sidney Makes Order Out of Chaos 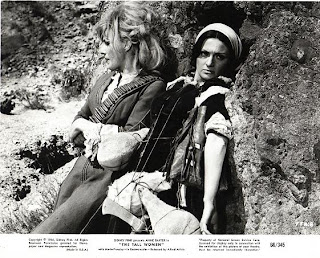 From: SO YOU WANT TO MAKE MOVIES
My Life As An Independent Film Producer
by Sidney Pink
We returned to Madrid where we promptly sent our worn-out actresses for hospital checkups. That gave me time to check the preparations of the other productions on our schedule. Elorietta had finished BOUNTY HUNTER and was ready for my approval of the final cut version. Jim Henaghan had completed his rewrite of FICKLE FINGER OF FATE. Dick Rush was waiting in Los Angeles for the order to come to Spain for casting and final preparation. Elorietta was also awaiting a final rewritten translation of WITCH WITHOUT A BROOM from Howard Berk, and I needed the CHRISTMAS KID script from Jim.
THE TALL WOMEN was in the cutting room awaiting some of my time to begin putting it into shape, but outside of that, I had nothing more to do than worry about some problems that Purgatori was cooking up for me in Rome. I began to realize that an octopus has an extreme handicap in having so many arms; it is not easy to know just what you have in any one of them.
I bit off more than I was able to chomp, and I began to feel as though I were in a revolving door. Every time I got to the entrance, someone called me from the other side and I was getting nothing done. Every effort at organization resulted in more confusion. I made the unforgivable error of having the entire organization revolve around me, and there was no one able or willing to make a decision. No one, that is, except Purgatori, who without authorization took it upon himself to make sales of the pictures that were under the Domino Films coproduction banner.
I never planned on individual sales to single countries, but that was the Italian way of doing things. Purgatori never consulted me about involving himself in our sales efforts, and the first I knew about it was a call from Lucio Bompani advising they had made a sale to the Middle East on our entire lineup, and Purgatori had accepted money and signed contracts on his own. He was never anything omre than a bookkeeper before, and the sudden elevation to general manager had been too much for him. The rarefied atmosphere at that high level had gone to his head, and he forgot he was merely an employee.
I was forced to make a two-day trip to Rome to pierce his balloon and being him back to earth. I should have fired him then and there, but with so many pots boiling I had no time to look for a replacement. He swore he would never do it again, and so I left and he remained as director gerente (man in charge).
Meanwhile, back at the asylum, things were going from bad to worse. Barnes returned from New York, chastened but sneakier than ever. This time he was determined to nail me to the wall. His first demand was for starting dates for the next four films and a fixed date for delivery of THE TALL WOMEN and BOUNTY HUNTER. Under the contract, I was obligated to give Westinghouse a schedule of start dates and delivery dates, but at that moment I was totally unprepared. I needed help, and fast.
I listened to the advice of Ricardo Merino, my assistant production manager, who had experience in multiple productions with an Italian associate of DeLaurentiis. He suggested we set up three independent production units, each with its own production managers who would be given completion deadlines; the production managers would be given authority to make their own decisions on all but the most major production problems. In this way I could be freed from the everyday problems these professionals were trained to solve. They would come to me only when it was truly necessary, but if I wanted more control, we could have a weekly meeting of all three units to report and discuss projects, problems, and needs. This would allow me to keep abreast of things while at the same time allowing me to work on the personal projects that required most of my time.
Ricardo's reward for this suggestion was his elevation to the post of production manager of the number two unit. I owed him a great deal because the plan worked almost perfectly. We were able to hire my old protege from Denmark, John Horvath (Yanchi's son), who was now working and living in New York. His training with us enabled him to get a job as an assistant film editor with an independent film editing company. I called him and offered him a job heading up our second cutting team, and he accepted.
Posted by William Connolly at 6:22 AM