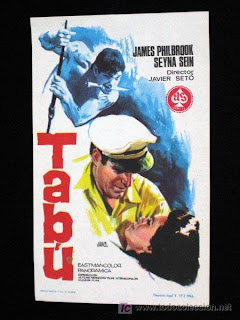 From: SO YOU WANT TO MAKE MOVIES
My Life As An Independent Film Producer
by Sidney Pink
When Elorietta's problem was solved, I concentrated on the others. Seto discovered a Eurasian beauty beginning a movie career in Rome with some success. Her name was Seyna Sein, and she had that mystique about her that only the Eurasians possess. He had cast her in DRUMS OF TABU but was having problems finding an adequate voice for her. It never occurred to him to consider using her own voice; European directors were accustomed to using one actor for acting and another for dubbing. Seto drove me up a wall until I flew Seyna back from Rome and we tested her to play herself. The result was astounding to Seto: Seyna could actually do a good job of speaking her own lines! A happy Seto finished the film.
Then Jack Gilardi called me with the news he had a director for FICKLE FINGER OF FATE. He wanted me to fly to L.A. to interview him. Since I really had no time, I sent plane fare for Richard Rush to come to Madrid to talk with me. He could, at the same time, see for himself the Spanish production facilities. According to Jack, Dick Rush had made a quickie film that was eliciting a great deal of praise from the "movie mavens". Jack was so impressed with his potential he signed him as a client. I had a great deal of faith in Jack's opinions and I was ready to hire Dick sight unseen, but Jack insisted he didn't want that responsibility.
I was impressed with Dick Rush; he obviously knew his craft and was full of ideas about what he wanted to do in the future. I asked him if he were willing to try new and innovative shots that were now becoming a trademark of the new generation of directors. He indicated he would appreciate the right to run his own ship, and if permitted to do so, he would attempt to give the Henaghan script a modern look. Antonio Macasoli, our cameraman for FINGER ON THE TRIGGER and now signed for FICKLE FINGER OF FATE, was there with us. Antonio agreed that Dick Rush was worth taking a chance on. We agreed on terms for his directing the picture, and Dick stayed on in Madrid a couple of weeks to work with Henaghan in polishing the final script. Then he went back home to work with Tab Hunter in preparation for the start of production, which we scheduled to begin in seven weeks.
Before I could begin working full-time on THE TALL WOMEN, I needed to find a second script for Jeff Hunter so we could set a starting date for WITCH WITHOUT A BROOM. Elorietta would be finished with BOUNTY HUNTER in just a few weeks, and he was chafing at the bit to start his next film and work with his first-ever international star, Jeff Hunter. Jim Henaghan knew about our dilemma, and he came to me with a new project for which he had neither script nor story outline. He wanted to do the life of Jesus as a Western, and although I didn't know how he could do it, I felt that Jim's ingenious mind would most probably find the way, so I paid him for the script and he promised to have it ready at least three weeks before we finished WITCH WITHOUT A BROOM. Now I had all my ducks in a row and we were ready to prepare the shooting schedule for THE TALL WOMEN.
Posted by William Connolly at 6:14 AM