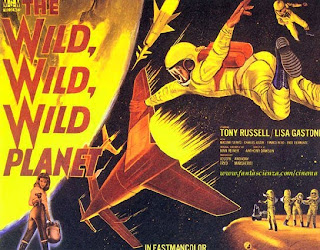 From: Tony Russel Our Man On Gamma 1
The Wild Wild Interview
by Michael Barnum
Video Watchdog No. 128 Dec/Feb 2007
As you began working more and more in Europe did you begin to get recognized on the street?
I can remember walking into a bar one time and this tall black man came up to me and said, "Excuse me, but is your name Tony Russel?" I said that it was. He was from Uganda and he told me that I was very popular with the kids there. So really, these films I was making were a big hit with the kids, which was very flattering. Evidently, there must have been some feedback that my name had become somewhat known in other countries. When I did the two science fiction films for Antonio Margheriti, they were produced, mainly, based on what they would pocket for distribution in foreign countries.
And those two science fiction films, WILD WILD PLANET and WAR OF THE PLANETS proved to be very popular in the United States.
Joe Fryd was the producer of both films and Lisa Gastoni co-starred. She was an attractive Italian girl, although she lived in England and spoke English very well. We shot these two films in about five weeks. I'd walk on the set and ask them what we were doing that day, and they'd tell me which of the two pictures we were shooting.
The two films were shot back-to-back?
Actually, they were shot concurrently. Back-to-back would have been a lot less confusing, but because the sets were the same in both films, they would shoot all of the scenes that took place on a particular set, at the same time. One or two scenes for one picture, then one or two fo the other picture. They would give me the script for those scenes and I would go into the dressing room and learn the lines as fast as I could, then we would shoot it.
What do you recall about director Antonio Margheriti? He made quite a number of sci-fi films during this period.
Yes, quite a few, and he changed his name to Anthony Dawson for many of them. He was a pretty good director, although more of a technician than an actor's director, really. He was a very technical man. "Make sure this is right and that is right and make sure this is over there." It was all done technically, if not highly skilled. It was a little disappointing at times because, if you looked close, you could see the strings against the background on the spaceships and such.
I was wondering what you thought of the special effects in these two films.
Well, they weren't that good [laughs]! MGM bought the two films and that is the only reason why they were so well distributed in the United States.
How as Lisa Gastoni to work with?
I thought she was wonderful and quite lovely. She had a great sense of humor. Of course she was the girlfriend of Joe Fryd, so that is how she got the part. Not that she didn't deserve the role, but that is how she got involved with it. She and I spent a lot of time together, joking around and having dinner. What a beautiful girl! She really should have gone further in her career then she did. I believe she worked quite a bit in London, also.
Franco Nero co-starred in both pictures with you.
When I worked with Franco Nero, he could barely speak English! but he was learning the language and you would always see him carrying books on English under his arm. Well, the next thing I know, he was doing THE BIBLE for John Huston, and then playing Lancelot in CAMELOT! I was thinking, "Well, he can't sing and he can't even speak English, but here he is playing Lancelot [laughs]!" But what do I know? His career quickly skyrocketed and he did many films - good, bad, or indifferent, he was working all of the time. When we worked together, he was quite a bit younger than I was. He was 21 or 22 years old when I met him and he was a very nice kid, very conscientious about his acting.
Posted by William Connolly at 8:41 AM