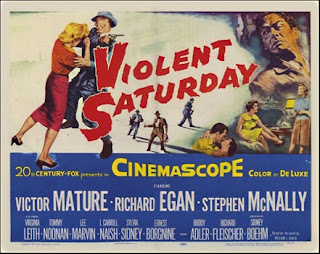 From: ERNIE the autobiography
by Ernest Borgnine
...DEMETRIUS AND THE GLADIATORS, which was a sequel to a very popular film, THE ROBE. I had to try out with a whole bunch of guys to play the head of the gladiator school. They let the crew pick, and the crew all voted for me. So I got the part, with Victor Mature and the wonderful Susan Hayward heading the cast.
It was a good experience - what boy, even on who was thirty-seven, didn't like playing with swords?...
Susan Hayward was a doll - beautiful, funny, talented, about as unaffected as a superstar could be. Mature was all right. He had been a leading man for five or six years, most famously as Samson in the Cecil B. DeMille picture. He was pleasant and easy to work with, but I don't think he took movie acting all that seriously. He had started on the stage at the Pasadena Playhouse. And it's easy for stage actors to be a little cynical about movies. Instead of doing a show from start to finish, you do it in little pieces. You psych yourself up, the camera rolls for a few minutes, then you go back to your trailer or dressing room and read the paper. It's serious work, but if you screw up, you can do it over again. There isn't the same kind of pressure. A lot of actors don't enjoy film as much as they do the stage, but you get paid so much it's tough to say no. I think Victor was one of those guys. He also had a "me vs. them" attitude towards the studios, which I found out about a year later when we did a picture called VIOLENT SATURDAY. Lee Marvin was in that one, too. One day, Richard Fleischer, the director, asked if Mature would dive underneath a car. The actor said, "No way!"
Fleischer was a little taken aback. "What if we dig a hole underneath there, would you dive then?"
"I'm not going underneath that car!" Victor replied.
He told me later that he refused because he had once done a scene for Columbia and broke his leg on a motorcycle. He wasn't compensated for it, so his attitude was to hell with them all - he wasn't doing anything dangerous.
Lee and I thought he was being a little prissy about it. I mean, this was a different situation for a different director and not really that dangerous. It's part of what an actor is supposed to do. But Victor had his own view, and I guess he was entitled to it.
Posted by William Connolly at 6:12 AM