Not an auspcious start for Sid Pink and Westinghouse. 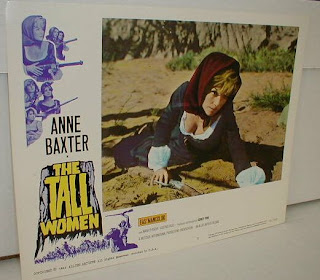 From: SO YOU WANT TO MAKE MOVIES
My Life As An Independent Film Producer
by Sidney Pink
Pack and Israel released a series of publicity blurbs filling the trades with the triumphant entry of Westinghouse into the world of film production. Suddenly, it seemed I was an employee of Westinghouse and Richard Pack had miraculously become an executive producer. I have a mention to maintain my self-esteem, so I paid little attention to the hoopla generated by Pack.
He convinced McGannon this instant success was easily duplicated, and so he was able to take the first step in empire building: He hired two assistants and now had his own staff. He also received the go-ahead to find other producers for similar deals, the intent being to make WBC a distributor of theatrical movies for television and, of course, to feed their "owned and operated" local stations.
Dick Pack's ambition had always been to become a producer, and his frustrations at having been relegated to minor production tasks now had a chance to correct themselves. He hired Jack Feldman, a mild-mannered, inoffensive young college graduate whose main talents lay in the field of accounting and budget control. Why Westinghouse needed a budget consultant was not immediately apparent to me, since by contract our company had the sole responsiblity for creating and maintaining production budgets. WBC had a fixed cost, and that was all the company could ever be called upon to pay. As it turned out, Jack and I never had any problems since his needs were easily fulfilled and there was never any abrasive action on his part.
For his own assistant, Dick hired Howard Barnes, a graduate of the slimy world of advertising. Howard had worked in several large agencies as a production coordinator, whatever that meant. He apparently had read a lot of books about film production since he was familiar with the jargon, but he had no concept or practical knowledge of the actual process. A smattering of theory mixed with absolute and abysmal ignorance along with driving ambition made him a real monster. He was, of course, pleasant-looking and well spoken, or he could never have survived the ad agencies. Like Dick, he was an experienced survivor of the "ass-kissing, find the soft spot" world of modern corporations. Dick Pack had hired himself a male "Eve".
I had very little respect for Dick Pack's talent, and I did not take kindly to his attempts to add his creative ideas to our program. He was too oily in his approach, and I instinctively mistrusted everything he did. In retrospect, this seems almost paranoid and Howard Barnes did nothing to reduce my uneasiness. Howard's attempts to butter us up made him come off as a hypocritical phoney. Anne Baxter despised him, and none of the actors had a kind word to say about him. I resented comments by Pack, but I positively bristled at any word from Howard Barnes.
This was not an auspicious start for our new joint venture, but Arnold and Peter made me hold my tongue and go along with the new changes. Howard was named production coordinator and was to spend time with us on the set as the liason between our two companies. He was responsible for evaluating any script changes that might be needed to satisfy production demands, but where there was disagreement, his word was not final. It was as stupid as putting a fox in the chicken coop to protect the chickens. If I had retained my sense of humor, I would have probably seen the ridiculousness of the situation and laughed at what had to happen. But in my active dislike for these kinds of parasites, I totally forgot I had a sense of humor and let it get to me.
Posted by William Connolly at 6:25 AM