No Victor Mature for FINGER ON THE TRIGGER 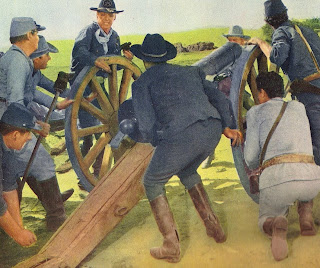 From: SO YOU WANT TO MAKE MOVIES
My Life As An Independent Film Producer
by Sidney Pink
Where was Victor Mature? It took ten days to discover his whereabouts, and then only through some super detective work on the part of the William Morris office in London. The folks there had heard rumors about a movie star hidden in a flat in Soho, and following that wisp of a lead, they discovered a besotted Victor Mature in an alcoholic stupor. They promptly cleaned him up and sent him with an escort to Madrid, where I would meet him on Sunday at the Hilton.
I managed to cover his absence by using Jim Philbrook, who was roughly the same size as Mature, in long shots of the exteriors, and anywhere I could shoot without showing his face. Having learned the cutting-room techniques, I constructed each shot so that I could fill it in later with close and medium shots of Mature himself. When we finished our shooting that Saturday, I got into my 1956 Cadillac (we foreigners were allowed to own American cars without paying the impossibly high Spanish taxes), and I barreled back to Madrid. I think I broke all speed records in my anxiety to meet that son of a bitch face to face. I arranged to meet Tony for breakfast in Mature's suite on Sunday. I sure as hell wanted to know what was going on.
That morning, I went to the Hilton and knocked on the door of Victor's suite, where I was greeting by Tony Recoder. He looked grim and angry, and I soon found out why. When I walked into that suite, I saw a naked man sprawled across the sofa. There was no way of waking him, and Tony and I debated what we should do.
Then a duplicate hulk walked into the room and introduced himself. He was Mature's stand-in. Except for the face, he could have been Victor Mature himself. He was a decent guy who was trying to make a living and a career for himself. Since his own acting abilities were very limited, he had attached himself to this drunk and made a career of playing nurse's aid, bodyguard, and general all-around Victor Mature substitute. He hauled the unconscious Mature into the shower, and about thirty minutes later, we met a semi-sober Victor Mature. He was badly hung over, but he looked a lot better in a robe. We ordered breakfast, and while we ate, he drank coffee and talked.
There was no apology, no regret, no reaction one would expect from such a horrible abuse of confidence. To Victor Mature, nothing had happened, and he carried on as if we were negotiating a deal. Without evincing any interest in how the picture was going, he proceeded to demand that all of his $25,000 be paid to him then and there, or he would never show up on location. Tony and I looked at each other stunned. It was hard to believe what we heard. When I blew up and proceeded to tell Mature what I thought of him, he acted as if he were deaf. I don't believe a single word I said registered.
Then Tony took over. He told Victor the money was in his hands, and the Morris office guaranteed not only Mature's payment, but also his presence on the picture. If Mature did not show up for work, Tony would personally see that his passport was lifted and turn him over to the Spanish authorities who would cancel his visa, and Mature would remain in Spain until his trial. Tony then asked me to leave, guaranteeing me Victor Mature would be in a studio car on his way to Almeria the next morning and I could schedule him for shooting on Tuesday. I had to get back for Monday's work, and so I left on the long trek back to location.
Victor Mature did indeed leave in a studio car the next day and he arrived in Granada for lunch, but then he promptly disappeared again. There I was, on my last legs as a film producer-director with a picture more than half completed without a leading man or a shot of a leading man. We advertised the picture as starring Victor Mature but we had no Victor Mature. Our Italian distributor insisted on a star name that would sell tickets to Western fans, and we had to oblige him. I knew what it meant to be in hot water.
Posted by William Connolly at 8:53 AM