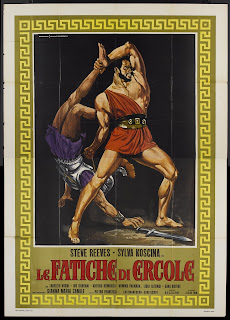 Ennio De Concini: Yes, in a moment of crisis in the cinema I invented the so-called "sandaloni", the Hercules Film. It was a period in which Italian cinema seemed dead. And so I said: "But why not make a fiction using a character from fable?" To think them up and write them down was hugely enjoyable for me, so much so that I then became a kind of honorary signatory to these films, because everyone who made these "sandaloni" came to me to sign their scripts. Even if I had not written them they still paid me to sign them, since in a certain sense I was regarded as the father of this type of film. It had occurred to me to do them in a simple way because the idea of distorting Hercules in an ironic key amused me very much. And in fact these films were very ironic, as for example in such typical dialogue: "Esculapio, move yourself, get across the river and come here!" To which Esculapio answered: "I cannot do that, I still haven't invented a remedy for rheumatism!" Or: "Hey, you handsome youth with the cunning look, how are you called?" "Ulisse!" "Ah, when you are older, they will call you the astute Ulisse."
In short these films were made with humor, but with a director who believed in them very much and who loved them. And it was certainly this that made their fortune. The director was called Pietro Francisci, and he was a very simple man.
Our first film of the series, LE FATICHE DI ERCOLE (HERCULES), starred Steve Reeves, and it didn't even cost us 100 million lire. But in America the movie has grossed I don't know how many millions of dollars, ten I think! However, when the idea came to me for this character who was good and strong, for HERCULES, one whom all men in their hearts dream of resembling, none of the producers were inclined to make it, everybody turned up their noses. The one person who had the balls to take the leap and make it was Nello Santi, perhaps because Francisci had kept him going, because they were both veterans of other successful films like ORLANDO E I PALADINI DI FRANCIA (ROLAND THE MIGHTY). Those films, however, were more straightforward adventure films, while here there was a fable for children proposed in a manner more elementary and simple to serve as escapism for adults.
Then, from Hercules to Maciste the step was very short.
Posted by William Connolly at 7:43 AM