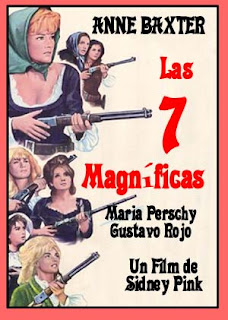 From: SO YOU WANT TO MAKE MOVIES
My Life As An Independent Film Producer
by Sidney Pink
Our New York contingent was working very hard trying to close the Westinghouse deal, but without my presence, they were unable to conclude anything. Dick Pack was nervous and balked at any final commitment or signatures until he knew that we had the six scripts. Meanwhile, Luis de los Arcos came up with a story idea about women in the Old West, but he was having trouble getting it on paper. His story concerned a group of women going West as mail-order brides for the pioneer men who had staked out claims and were developing the land. He didn't know enough about that era to bring it into focus, so he was completely stuck. We worked together, and when we finished, we had a John Wayne type story, but this time John Wayne had to be a woman.
We told the story by concentrating on seven women who became the sole survivors of a caravan after an Indian attack that massacred the rest of the group. The women were hidden in a cave while the Indians ferociously wipes out the men and soldiers. Their only escape route is across a hundred miles of desert country inhabited by the same hostile Indians. Alone, inexperienced, and possessing only raw courage, they make it across that dangerous terrain.
The Spanish title Luis gave the script was LAS SIETE MAGNIFICAS, a takeoff on the highly successful MAGNIFICENT SEVEN, but the genders of Spanish made the definite statement that these magnificent seven were women. Since English has no gender equivalent, I came up with the title THE TALL WOMEN, for in the Old West, when you were brave, you were tall.
I turned this rough script over to Jim Henaghan for polish and went to work on an Elorietta script called WITCH WITHOUT A BROOM, a comedy about an inexperienced witch who falls in love with a twentieth-century professor. Jim had written a new script for us sometime earlier, titled THE CUPS OF SAN SEBASTIAN, which we retitled THE FICKLE FINGER OF FATE, because Laugh-In was making that phrase quite famous on TV. We had a story outline for DRUMS OF TABU, and another Elorietta gem called GIRL OF THE NILE. Armed with these partial and finished scripts, I went back to New York to finalize the Westinghouse deal.
Posted by William Connolly at 6:09 AM