Anne Baxter for THE TALL WOMEN? 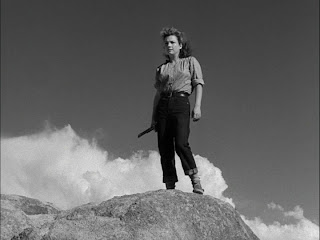 From: SO YOU WANT TO MAKE MOVIES
My Life As An Independent Film Producer
by Sidney Pink
While the lawyers were busy earning their gigantic fees (writing up the contracts), Dick Pack and I were embroiled in the first of the many script problems that marked our abbreviated association. He had read THE TALL WOMEN and was full of suggestions for rewriting and improving the screenplay. All of his ideas were ased on his own personal likes and dislikes, with no regard to the story continuity or the flow of action so necessary in outdoor action-adventure films. He had no idea of the problems of making a budget film, nor did he have any real dramatic flair. He was a most dangerous type of human being, a self-professed writer with no credits or experience.~During my creative career I have found that people are "mavens" on two subjects: Everyone is a writer and everyone is a critic. We will admit ignorance on other subjects but never in these two areas. Were it not for these attributes, we would not have people attending plays and movies and so I must rejoice in it, but it's a real crock when you must deal with it in a person of authority. Dick Pack was one of those who could never be wrong, and even when he was, he had that miserable knack of twisting the truth so that in his own mind, at least, he would always be proved correct.
We were at complete odds over THE TALL WOMEN, but fortunately for me, he was still not too secure in his new role as production supervisor for Westinghouse, and he ultimately gave in and approved the final script. I decided not to push my victory too far and I gave him more authority in casting the roles, which boomeranged in my face. I learned the more I tried to assuage him, the more demanding he became, and like other attempts at appeasement, it just didn't work. He insisted on a star male and female in the picture, and he refused to listen or understand the impossibility of securing a male star to accept what was essentially a minor supporting role in a film in which the real leads were women. Grudgingly, he finally condescended to approve the entire cast if I could get an actress of the stature of Anne Baxter to accept the lead.
I was not at all certain I could even talk to Anne Baxter, let alone get her to sign a contract, but I knew I had to give it my best shot. Anne Baxter had always been my ideal of a great actress, and I had been a fan of hers for years. I knew she was the granddaughter of Frank Lloyd Wright, and my conversations with Barry Sullivan and Cesar Romero indicated that they also felt she was one of the finest actresses in the world. I think I was secretly in love with this beautiful woman since I first saw her in YELLOW SKY with Gregory Peck. She would have been my first choice for anything I ever made, but above all I wanted to cast her in this unique Western.
Posted by William Connolly at 10:19 AM