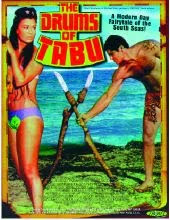 From: SO YOU WANT TO MAKE MOVIES
My Life As An Independent Film Producer
by Sidney Pink
I wanted Westinghouse approval of at least the first six to eight scripts, as I had no desire to waste any more valuable production time in these kinds of squabbles, so I insisted Dick read every script and story outline I had with me. I presented the two Elorietta scripts, Jim Henaghan's FICKLE FINGER OF FATE, and Seto's DRUMS OF TABU; then I found the secret to getting a quick okay. I had been too blind to see what was obvious to everyone else: Dick Pack was star-struck. He was impressed by any name, big or small, and loved to bask in the reflection of any "star". Their acting abilities made no difference to him; they just had to be recognizable names.
I got in touch with Jack Gilardi and asked him for a list of his clients who would be available for a maximum price of $25,000 per picture. As usual, Jack hustled his butt and came back to me in less than a week. He could get Jeff Hunter for a two-picture package if I could shoot them back to back or with no more than a two-week hiatus between films. Jeff Hunter was quite well-known at the time-having played the role of Jesus in Bronston's THE GREATEST STORY EVER TOLD. Hunter was totally acceptable to Pack-so much so that he approved the second film with no script. I was offered Tab Hunter for my price, and I found Pack just as eager to grab this once-upon-a-time big name. We signed him for WITCH WITHOUT A BROOM.
Dick was so delighted with these stars that he immediately released stories to the trade papes to prove Westinghouse was involved in big-time film productions. Variety and Hollywood Reporter were of such importance to the super-inflated egos of Hollywood that breakfast could not be touched until the trades had been thoroughly read to find out what other actors, directors, or companies were doing. They paid huge sums to press agents to plant items in these papers that most of the time were improvised. Although everyone knew they were fictional, they were read and believed as the gospel. I know of actors who read they had been cast in something or other and, despite the knowledge their press agent had stretched the truth, called to see if it were true! Hollywood make-believe is not relegated only to the silver screen; it is an ever-present reality in the daily existence of the players in this make-believe world.
Now we had four scripts and cast approval, but I needed more. I approached Pack again and extracted a further compromise from him. If I were able to get Anne Baxter and if she agreed to permit me to direct the film, I wanted his approval for two pictures to be made by Elorietta with casts and scripts pre-approved. I guaranteed an American actor of some name value in the lead, but I didn't want to be hamstrung while I was in Spain and he was in New York. Pack was so anxious to get Anne Baxter he agreed. I had approval for six pictures plus the untitled Jeff Hunter film, contingent on getting Anne Baxter.
(Of course, Jeffrey Hunter was in Samuel Bronston's KING OF KINGS, not THE GREATEST STORY EVERY TOLD.)
Posted by William Connolly at 5:50 AM