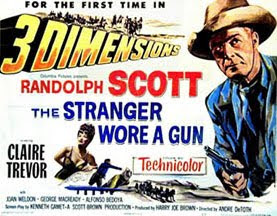 From: ERNIE the autobiography
by Ernest Borgnine
THE STRANGER WORE A GUN was the picture where I met a lifelong friend, Lee Marvin. Rhoda was still back in New York and I was living at this hotel for men. The studio sent a stretch limo to pick me up for a location shoot in Long Pine, California. When the car arrived, I had two great suitcases, which they put into the trunk. I got into the stretch and saw this long-legged guy with a little overnight satchel and a funny look on his face.
He looked at me and he said, "What the hell's with the suitcases?"
I told him, "Well, I can't leave them down here because nobody knows me and I don't know where to put them. I've got to go back to New York and pick up my family after the picture's over."
"Un, huh," he said. He looked me over with those steely eyes of his. "You serve?"
I knew what he meant. "Navy," I replied.
He grinned, "I thought so, way you're all packed up for a long sea voyage."
I learned that Lee had been in the marines and those boys like to travel light. I also found out that he was wounded in the Battle of Saipan - shot in the ass by a bullet that severed his sciatic nerve. He used to joke that of course they put him in pictures like THE WILD ONE or westerns where he had to ride.
"I can be kicked in the backside by a mule and I wouldn't feel it," he said.
We talked back and forth and we smoked back and forth. (I gave up the cigarette habit a few years later.) We were getting along pretty good by the time we reached Lone Pine.
The director was Andre De Toth, who wore an eye patch, having lost an eye as a kid. But here he was, directing a movie in 3D!...
When we arrived, Mr. De Toth looked at me with this kind of sideward glance and said, "You ride, don't you?"
I said, "Yes, sir."
I didn't, but I'd learned that you never said, "No." That could cost you a job.
After we'd gotten into our costumes - I was playing a tough gang member named Bull Slager - Mr. De Toth said, "You see that man standing up there on that little hill?"
I said, "Yes, sir."
He said, "I want you to ride up there, turn the horse around, and when I drop the handkerchief, you come down here lickety-split, grab your gun out of your holster, say 'Take cover, men' and go out of the scene."
After surreptitiously watching how the other actors mounted their horses, I did the same and rode up to where some stuntmen were slipping and sliding on what little snow that was left. I rode slowly, because the snow was treacherous and there were boulders all over the place.
The horse got me where I needed to be, but when I turned around, what had seemed like a little hill now looked like a mountain, straight down. I must have looked a little green around the gills, because a wrangler nearby asked, "Ernie, what's the matter?"
I said, "Ah... I didn't expect the hill to be so steep."
He said, "Tell you what. Just give the horse his head, he knows what he's got to do, which is get down from here. If he drops his head any, just yank 'er up, because then he won't trip."
Sure enough, the handkerchief dropped and off I went. I had that horse's head in my lap all the way down. I came in with a flourish, yelling, "Take cover, men!" Then I drew my pistol, jumped off the horse, went out of the scene, and nearly fainted.
Randolph Scott came up to me, took off his spurs and handed them to me. "Kid," he said, "that was a helluva stunt. You earned 'em."
But I looked over where some of the crew was standing and there was Lee Marvin, wagging his finger and tsk-tsking. He gave me a kind of amused look that said, I know you ain't no rider, but I'm not gonna rat you out.
We became great friends. I have a picture of him dressed as the hobo in another film we did, EMPEROR OF THE NORTH, and I asked him to sign it. He put down "To Ernie, love, Randolph Scott."
That rascal.
Posted by William Connolly at 6:10 AM