Leone on ONCE UPON A TIME IN THE WEST 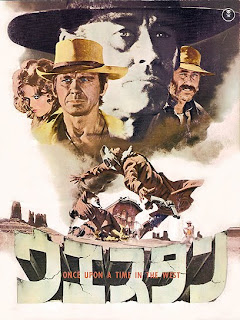 Sergio Leone: With C’ERA UNA VOLTE DEL WEST (ONCE UPON A TIME IN THE WEST), I wanted to create a fresco of the birth of a nation, inserting into it some of the classic stereotypes as well (albeit in a revisionist, reinterpreted spirit) like the five who dominate the film - the social climbing whore fresh from New Orleans, the romantic bandit, the dishonest banker, the avenger, the bandit with business ambitions. But the style, too, had to be important as never before: it had to unfold like a dance of death, a tribute to a past that's disappeared forever. At the beginning there's an abandoned station, at the end a station under construction. The dialogue helps clarify many of these points: the end of the period of men with balls and the arrival of those who have only cash. The film has a mosaic-like structure, made out of little squares, with extremely precise symbols, even if there are those who haven't fathomed their full significance. I was a little fearful about all of this, I didn't foresee the success it would go on to have. The theme of revenge was very important because it is the only motivation for certain characters, who'd just cease to exist and disappear without it, it is -then- an end in itself like a game.I researched it at length - as always - chiefly relying on books. One of the things I remember with great satisfaction is a trip I made to Washington with Vincenzoni. I'd read in a book something about a small battle that had taken place in Texas during the War of Secession: a fight to take over a goldmine. This had set my imagination traveling in a certain direction, and so, finding myself at the Library of Congress in Washington, where they'd photocopy any book they had for ten dollars, I asked the librarian if he/she had any publication about this event which had taken place on "x" date in "x" place. He looked doubtful, and told me to come back tomorrow. When I arrived afresh the following day, the librarian stared at me as if I were a monster/ghost, and while he passed along eight photocopied volumes dedicated to the event, he said to me:" Now I understand why you Italians make films so well! In all the years I've worked here, not one American director has ever asked me anything about this episode!"
For ONCE UPON A TIME IN THE WEST I also made a trip with my Set Designer through Texas, Colorado and Arizona to do documentary research, and everything you see in the film was reconstructed from historically based material we found together, which I then fleshed out with fantasy. For example, the famous "posada" (tavern) where the men and horses ate derived from an authentic example. It was my first film as Producer-Director; I was fed up with producers who always screw you, who are anxious about what you're doing, and who, and instead of helping you organize a production end up throwing a wrench into the works. One works much better without a producer of this type, one has the freedom to take risks, even to make mistakes, but that's risk-taking, no? Producers who help the director rather than exploiting and annoying him are an extinct breed. I was supposed to do the film with the financial backing of United Artists. But they insisted on actors I didn't want, much more expensive and famous than the ones I preferred (for example, they were dead set against Bronson), so I made the film with Paramount instead. The screenplay wasn't very precise, it was a story I'd thrown together with Bertolucci and Dario Argento, and the script was very open, very sketchy, The details were filled in on the set.
Posted by William Connolly at 6:10 AM