Directing TODAY IT'S ME...TOMORROW YOU 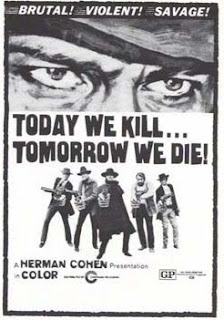 Tonino Cervi: When I'd go to the distributors, the financiers, agents, actors and tell them the stories of the films I planned as a producer, I so often heard them say: "But why don't you direct it, seeing that you've told it and visualized it so well!"
Once I went to a producer and proposed to him yet another Western, OGGI A ME...DOMANI A TE (TODAY TO ME… TOMORROW TO YOU): "Listen. There's this very entertaining story I've written with a young journalist named Dario Argento..."
"Who's directing it?"
"Listen, given that the last ones I've done, I practically ended up directing myself, why don't we just pick the first person walking down the street, and it will go fine."
"But, hey, why waste time. Why don't you just direct it yourself?"
But yes, but no, yes, no, then again yes, but maybe not.
After fifteen days I adapted it for Bud Spencer, my friend from the days when he still called himself Carletto Pedersoli, and we acted together in the theater. And I had four faces with blue eyes, because it was the moment of the faces with three days growth of beard, and as antagonist a Japanese actor I really loved. Not Mifune but Tatsuya Nakadai, who went on to be the hero in KAGEMUSHA. In the film the set design was very Japanese, and there were beautiful, strange costumes. Nakadai was a marvelous actor, but he only spoke Japanese and needed an interpreter. But after two days we sent the interpreter away, and we understood one another perfectly. I explained myself with gestures and he understood everything I wanted with an exceptional sensitivity.The sword duel between the Samurai and Pedersoli had an incredible success!
I began work the fifteenth of January and the film was released all over Italy on March 24th, two months later. In two months, everything. Even the reviews were great; some of them were truly enthusiastic. We shot it at Manziana, where all the Italian Westerns were shot, but many film people asked me where I filmed it, because there was a certain atmosphere, a certain color, a texture, which weren't the same old thing.
And there was also a screenplay with some original ideas. At that time Dario Argento was a nervous wreck: totally neurotic, he bit his nails, he tugged at his hair, he couldn't keep still, he writhed. He's like a sponge. If he likes a movie, he sees it seven times, and entire scenes stay lodged in his head, the camera moves, just as they're shot. And then he refers to them later. Our collaboration went very well, he brought me ideas for the story, bits of character development, certain situations, to be fit into the basic story which was more my own, more "Japanese" in nature. He's a person who memorizes fifty thousand things and brings you fifty thousand ideas, of which ten work well, the others, no.
Posted by William Connolly at 6:21 AM