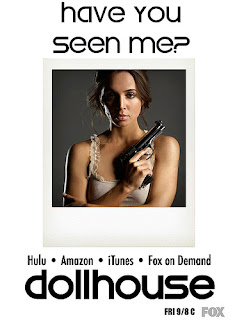 After poor ratings last season, Fox ordered only 13 episodes for season two of Dollhouse. The hope was that if ratings improved, the network would then order 8 more for a full season of 22. Unfortunately, that hasn't happened, and now many fans worry that, like Firefly, Dollhouse may be cancelled before everything that has been made is shown. So, Friday is another opportunity to see the show during its original broadcast - rather than catching it later on DVD.
Posted by William Connolly at 8:41 AM