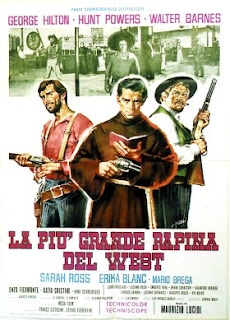 LA PIU GRANDE RAPINA DEL WEST
THE GREATEST ROBBERY IN THE WEST
THE GREATEST KIDNAPPING IN THE WEST
HALLELUJAH FOR DJANGO
French: TROIS SALOPARDS, UNE POIGNEE D'OR
German: EIN HALLELUJA FUR DJANGO
Spain: EL MAYOR ATRACO DEL OESTE
Director - Maurizio Lucidi 1967
Cast: George Hilton (Billy "Rum" Cooney), Hunt Powers ("Padre"), Walter Barnes (Jarrett), and Erika Blanc (Jenny).Mario Brega (Andreas), Glen Fortel, Katia Cristine (Katie O'Brian), Marisa Quattrini (Moira), Giovanni Scarciofolo, Salvatore Borgese, Bruno Corazzari, Luigi Casselato (bartender), Umberto Raho, Luciano Rossi (telegraph operator), Luciano Catenacci, Rik Boyd, Mauro Bosco, Lorenzo Sharon, Cesare Martignoni, Lucia Righi, Valentino Macchi, Luigi Barbacane, Paolo Magalotti, Luciano Bonanni, Bill Vanders, Desiderio Raffaele, Roberto Alessandri, Tom Felleghy (Sheriff Ray Norman), Stefano Alessandrini.
Not credited: Enzo Fiermonte (Sheriff Martin), Sarah Ross, Jeff Cameron (Mark).
Story by Augusto Finocchi
Screenplay by Augusto Finocchi and Augusto Caminito
Director of Photography by Riccardo Pallottini
Music by Luis Enriquez Bacalov
conducted by the composer
music copyright General Music
Editor Renzo Lucidi
Sets and Costume Designer Giancarlo Bartolini Salimbeni
Props Cesare Monello
Production Manager Livio Maffei
Assistant Director Aldo Lado
Production Assistants Enzo Mazzucchi, Alberto Fiorentino
Production Secretary Angelo Sarago
Accountant Maria Spera
Continuity Filippo Perrone
Cameraman Sergio Martinelli, Umberto Grassia
Assistant Operator Carlo Tafani c.s.c.
Sound Engineer Fiorenzo Magli
Sound Recorder Antonio Forrest
Stunts Salvatore Borgese
Makeup Andrea Riva, Gaetano Capogrosso
Hair Stylist Adriana Cassini
Still Photographer Enrico Appetito
Set Dresser Giuseppe Monello
Interiors filmed at Cinecitta - Rome
Processing Laboratory Technicolor Italiana
Negative Kodak
Costumes from Tigano Lo Faro and Teruzzi
Weapons and Properties from Set - Rome
Title song sung by Hunt Powers
Produced by Franco Cittadini, Stenio Fiorentini
A Mega Film Production
Distr. Panta
Prod. Reg. 4024
With a promising premise, strong production values, a terrific cast filled with familiar faces, and a director who had proven himself worthwhile with the earlier MIO NOME E PECOS (U.S.: MY NAME IS PECOS), LA PIU RAPINA DEL WEST seemingly had everything going for it. Unfortunately, no one developed the premise into a script tight enough to prevent a viewer from noticing a lack of purpose and holes in plot logic.
After an overly clever bank robbery in Middleton, the film settles into Porlance and a plot which requires the robbers to stick around awaiting the arrival of an Indian guide to take them across the desert to Mexico. What no one knew was that one of the robbers, who usually dressed as a monk and was called "Padre", had killed the guide in an half-baked plot to horde all the booty for himself. "Padre" also had his eye, as well as other parts of his anatomy, on Jenny, the gang leader's woman.
Eventually, Jarret, the gang leader, had the town sheriff killed, and a revenge plot was set in motion by the sheriff's near' do well brother.
Star George Hilton got to reprise his drunken hero role from director Lucio Fulci's TEMPO DI MASSACRO, but without even the slight complexity that film offered. American actor Hunt Powers seemed to be positioned to become the new Western star with this role, playing the charming rogue "Padre" and even singing the theme song. However, the film didn't attract enough of an audience for it to help either man's career.
Walter Barnes brought his usual strong presence to the villain's role, but couldn't overcome the script's insistence that he behave stupidly inorder to deliver a satisfying performance. The seeming uncertainty regarding the film's purpose was reflected in the music by Luis Enriquez Bacalov. An opening theme song suggested that the film was intended as a comedic romp, and the film's conclusion - which is reminiscent of the ending to director Enzo G. Castellari's VADO, L'AMMAZZO E TORNO (U.S.: ANY GUN CAN PLAY and GO KILL AND COME BACK) - backed up that assumption. However, the film's recurring theme music - which was highly reminiscent of a piece Bacalov used in both DJANGO and QUIEN SABE? (U.S.: A BULLET FOR THE GENERAL) - suggested a more straight-forward action perspective. It was a highly enjoyable score and deserved to be on a better movie.
More positive points for the film include the appearances of Erika Blanc and Katia Cristine. Erika was saddled with the rather dull role of our hero's very sober, and long suffering, girlfriend. She got one of the film's better scenes in which she was stalked by an amorous Mario Brega. Our hero arrived and, from the shadows, pummeled Brega, who kept mistaking the punches as coming from the woman. Katia, who was so memorably murdered by Alain Delon in L'HISTORIES EXTRAORDINARIES D' EDGAR ALLAN POE (U.S.: SPIRITS OF THE DEAD), didn't even get that much in her role of a sweet girl in town. The most she got to do was to be manhandled by a couple of the outlaws. Luckily, the character was saved from rape, but the scene seemed to indicate the filmmakers were flirting with including some female nudity.
One of the most interesting elements in the movie involved being aware that the town of Porlance resided on the backlot at Cinecitta. Meanwhile, the sentry outpost at the edge of town was in Almeria, Spain. So when Stunt Coordinator Salvatore Borgese, in the role of a Mexican henchman, sneaked out of the saloon to kill the sentry, he had to fly to another country to complete his attack.
Posted by William Connolly at 6:17 AM