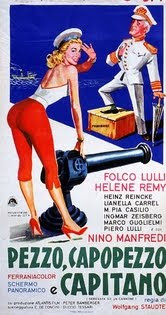 Duccio Tessari: De Concini had the ideas, and on these ideas was built the scenario which grew out of our discussions of the scenes. After which we collaborators went home and wrote the screenplay; he saw again it and thus we arrived at the finished product. This laborious method, was the system with which we worked.
With De Concini I had collaborated on the screen-play of a film more German than Italian: PEZZO, CAPOPEZZO E CAPITANO. He liked the way that we worked together and suggested that I should become his dogsbody - a sort of uncredited slave - but this was not at all how he treated me, because he always made me sign the screenplays in which I participated. Ennio at that time was like a magician. In each room of his house there was a producer waiting for his scripts, and he would move from one room to the other with the greatest of ease in order to sort out each of these projects in turn.
He was indeed extraordinary, a man of continual inventiveness, a volcano.
Posted by William Connolly at 6:11 AM