A new opportunity for Sidney Pink 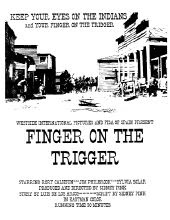 From: SO YOU WANT TO MAKE MOVIES
My Life As An Independent Film Producer
by Sidney Pink
Now that I was able to eat like a human being again, I got off my duff and began to visit those people who had been good to me through the years. Among these was Bill Piper, head of the Paramount Pictures foreign department. Bill and his wife Edith visited with us in Spain after we made our deal for distribution of PYRO in England, at which time a close friendship was formed. I never tried to use my personal relationship with Bill to make any deals, but in the case of FINGER ON THE TRIGGER, I honestly believed that Paramount could do very well with the picture in England and the Far East.
With this in mind, I called Bill and told me about the picture and its acceptance by Allied. Much to my surprise, he had already heard about it. It seemed that Giroux was so pleased with the deal he had broadcast the coup all over New York. Bill held a screening for his salespeople, and we made our deal with Paramount to distribute the rest of the world. I accomplished all of this in less than three weeks, but the best was yet to come, thanks to Stan Turtletaub and his crew.~As I was preparing to return to Madrid, I received a call from the production manager of the Turtletaub Agency, who had a brilliant idea after he saw FINGER ON THE TRIGGER. He knew Westinghouse Broadcasing was searching for films for the company's owned and operated stations as well as its distribution arm. Westinghouse was at that time producing the Mike Douglas Show and other popular shows distributed by its new syndication division. He spoke to Richard Pack, vice president in charge of production at Westinghouse, who expressed a desire to see the film and to meet with me. I didn't believe there was any future in this, but I couldn't afford to pass up the opportunity to meet any head of production, so I arranged the screening and a luncheon appointment with Richard Pack.
Westinghouse Broadcasting is the television and radio arm of the giant Westinghouse Electric Corporation, operating as a separate entity. At that time it was under the leadership of Donald McGannon, who built it into a highly successful and forward-looking communcations company. His only weakness (some considered it a strength) was that he was too damned prim and proper in his private life, and he brought that point of view into his business attitude. Westinghouse, known as the prissy network, would not touch any product that had the slightest hint of sexuality of any item that was anathema to the Catholic church or the Council of Churches. This made no difference to me, as I had never made any film that was at all controversial in any of those respects.
I called Madrid and spoke to Gregorio about this new Westinghouse development, but he was uninterested in any future productions. It seemed he had been given hell by the powers at Mole Richardson. They told him it was not company policy to get involved in production financing other than providing credit arrangements for the use of the company's equipment. Although Mole Richardson had doubled its investment in profits from the sale of FINGER ON THE TRIGGER, he was cautioned not to involve the company again.
This was no great blow to me, since I really didn't need that participation any longer. If anything were to come from the Westinghouse negotiations, I could handle it myself, and I really didn't want to report to anyone about production decisions. Gregorio agreed to return Mole Richardson's shares of FISA stock at no charge. I instructed Tony Recoder to make the legal transfer of Pepe Lopez Moreno as my representative, and now I was free to make my own decisions with no interference.
Posted by William Connolly at 7:25 AM