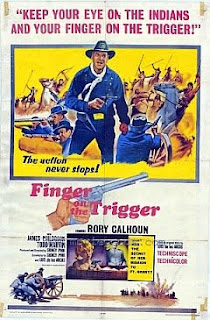 From: SO YOU WANT TO MAKE MOVIES
My Life As An Independent Film Producer
by Sidney Pink
(After making FINGER ON THE TRIGGER in Spain, Sidney Pink is approached to make feature films for TV syndicators Westinghouse Broadcasting. He had lunch with Richard Pack.)
Dick and I got on very well at that luncheon. We had a mutual need for each other that made an easy cooperation necessary. Dick needed me to get his company into motion-picture production, which he correctly foresaw as the future of the television business. He was in the right spot to head up a production company, and he had been given authority by Larry Israel to bring in a production program exposing Westinghouse to minimal risk but with a potential of quantity and it was hoped quality production. His need of the moment was to see our Western and then, if he found it acceptable, to convince McGannon to embark upon a program of movie production. Westinghouse could not lose if costs were held to the price paid for films purchased for the five owned and operated stations. That was the crux of the deal. The usual movie price paid for two runs at the Westinghouse states was about $75,000. We scheduled the screening at the Westinghouse projection room for the next day, and we parted.
The screening was held in the morning, and I invited the Turtletaub executives to attend since it was they who arranged this precedent-shattering meeting. I felt they were entitled to be on the scene if a deal actually came about. Westinghouse was represented by Larry Israel, Dick Pack, and Donald McGannon.
These men were totally dissimilar in every way. While Dick was chubby and looked well-fed, Larry Israel seemed almost emaciated and had a constant sour look on his face. He was always preoccupied and received more phone calls (that seemed to make him even more sour) than the rest of the executives combined. He was one of the most harassed human beings I have ever met, and it was no surprise to me that shortly after I met him, he resigned to take over an editorial job on the Washington Post. I never got to talk very much to Larry, but I learned he was the most able man in the news business and had single-handedly moved the Westinghouse stations to the top of the ratings in their respective cities. Dick Pack was, of course, promoted to Larry's job, and I often wonder if our contracts and dealings might have been different had Larry Israel remained.
The screening was an instantaneous success. McGannon, who turned out to be a Western buff, was enthralled with the thought of such a movie being made out of the country, and Larry Israel was amazed at the final cost with so much production apparent on the screen. Dick Pack sensed he had won, and turned to me to ask, "How long will you be in town?"
My plans were to leave the next day since my presence was needed in Madrid to close out the entire FINGER ON THE TRIGGER deal as well as to bring FISA into the position where I could control it legally. I knew that a deal as complete and all-encompassing as the one we were about to negotiate would take a lot of time, so I agreed to start the contract talks immediately. However, I advised them that my affairs in Madrid were so pressing I would have to leave in at most a week. They suggested I get someone to represent me in negotiations while I was gone, and I agreed. We parted with the sense that a production deal was in the making.
Actually I was too stunned to realize what was about to happen. I had always visualized a marriage between TV and movies that would permit the independent producer the luxury of selecting projects without the help (?) of a distribution company or without the expensive completion guarantee demanded by banks that financed production. That it was about to happen was too dazzling a future for me to visualize, and so I kept on trying to convince myself it just couldn't happen.
But for now, I needed a representative or lawyer to keep the negotiations alive while I returned to Madrid. I had no idea where to find someone I could trust to represent me in such delicate negotiations. I also realized we would eventually need the help of a bank to finance any Westinghouse deal, and it would have to be for large sums of money.
Posted by William Connolly at 8:45 AM