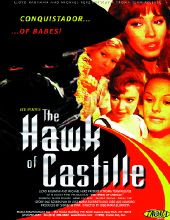 From: SO YOU WANT TO MAKE MOVIES
My Life As An Independent Film Producer
by Sidney Pink
Now I turned to another problem we had not considered in New York. It was very easy to discuss making thirty-six pictures in five years, but what stories would we make? I had no scripts ready after we finished FINGER ON THE TRIGGER; I had made no provision for the future since I didn't really know if there would be a future. I contacted Jose Maria Elorietta, a prolific-producer-director-writer, with whom I had coproduced several films. Together we made THE HAWK OF CASTILE, a swashbuckler that turned out to be a damned fine film, and BALBOA, CONQUISTADOR OF THE PACIFIC, which starred Frank Lattimore and for which I had been instrumental in getting government permission for shooting in Panama. Jose Maria had plans for making about six other films for which he had scripts. I urged him to get the finished scripts to me so I could rewrite in English.
While Elorietta was the most prolific producer-director I ever met (he normally made four pictures a year), he was not interested in making a lot of money. He was content to make a small profit that allowed him to live like a Spanish millionaire, but he never saved a dime. He loved to drink, and although he adored his wife, he enjoyed having a good time too. So he worked and spent and spent and worked, and he was very happy doing just what he pleased.
He was extremely talented, but his best work was done in the mornings. He would arrive on the set early in a perfect state of sobriety, but by early afternoon, the constant drinking of cognac began to take its toll and he would be unable to continue. His films had magnificent shots as well as some of the worst imaginable, but he really didn't care. His sole concern was to finish the picture on or under budget, and he never failed in this. Jose Maria and I agreed he would make at least three films a year for me; we agreed on the budget and a guaranteed profit for him. Now I had almost half of the thirty-six pictures assured, if we could mutually agree on scripts.
I also contacted Javier Seto who made a film in conjunction with us called LA LLAMADA. It was an excellent horror film that was built around a warm and sensitive love story. It was very well made and starred to reliable young actors; its only drawback was Seto's insistence on making it in black and white. The picture, which we retitled SWEET SOUND OF DEATH, never reached its full audience potential because of the black and white, but I am proud to have my name on the quality film. I arranged with Seto to make at least one more picture for us from a script that he would submit for approval. He had a project in mind called DRUMS OF TABU which could be of genuine interest to us.
Posted by William Connolly at 5:55 AM