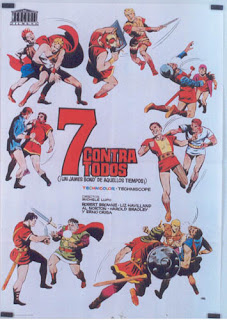 From: Tony Russel Our Man On Gamma 1
The Wild Wild Interview
by Michael Barnum
Video Watchdog No. 128 Dec/Feb 2007
As a practiced fencer, SWORD OF DAMASCUS (1964) would seem to be a perfect fit for you.
You know, a lot of times I was cast in a film simply because I could fence or because I knew how to ride a horse or something like that [laughs]! SWORD OF DAMASCUS was the second or third film I did in Europe. The movie was going to be called THE THIEF OF DAMASCUS, but that title had already been copyrighted by 20th Century Fox. In SWORD OF DAMASCUS, I play a pickpocket and I fall in love with the girl and, at the end of the film, they are going to cut off my head. The cast in this film was rather weak. The budget didn't allow for them to get the really good actors, and that is including myself [laughs]! Although I starred in it, I was not getting a hell of a lot of money; but at this time I was still relatively unknown, so that was to be expected. After the first couple of pictures, and after I became better known in Europe, I could start asking for a little more money.
You also made the requisite gladiator films. In your case, it was THE SPARTAN GLADIATOR and THE SECRET 7 (aka THE INVINCIBLE 7).
THE SECRET 7 was shot in Spain by director Alberto De Martino. There was plenty of action in that film. The guy who played my brother in that picture, Massimo Serato, was a very good looking guy and a very good actor. However, he kind of resented me as an American starring in Italian pictures. We were amicable but I could sense his resentment, and I overheard him a few times expressing that resentment. Quite often, people I worked with in Italy didn't realize that I was of Italian heritage because I was using the name Tony Russel.
You and Massimo Serato appeared together again in THE SPARTAN GLADIATORS.
Yes, he was in that one as well. THE SPARTAN GLADIATOR is the film where they put all the mirrors in my face to punish and torture me. To me, these were all just action pictures; they really had no substance. Just fight scene after fight scene, horseback riding, and all that stuff.
The beautiful Helga Line had leading lady duties in both of your gladiator films.
She was very nice, and also very young. Of course, they were all younger than I was. Hell, when I got to Italy I was already 36 years old! So I was pushing 40 when I made these two gladiator pictures. Most of the actresses I was working with were, I am assuming, in their 20s. One day Helga and I were sitting in a car and I noticed this little scar by her ear. I mentioned it and she sort of ignored my comment. Well, I said, "Come on, Helga, did you have a face lift?" And, sure enough, she had had a face lift [laughs]! You know actresses, as soon as they see those wrinkles or crow's feet, they have their eyes pulled back and their forehead tucked up into their hairline. Helga was really a very nice gal. I have to say I was lucky, in that most of the people I worked with in my career I really have no complaints about.
I understand that you had a small mishap with your horse during the filming of THE SECRET 7.
During one scene, I was supposed to dismount a horse while on the side of a mountain. I leaned on the left rein and the horse turned its head and clobbered me in the side of my head. My cheek was so swollen after that, they had to photograph me from the right side for the next three days [laughs]!
As you frequently did your own stunt work, it's surprising that your injuries weren't more serious. As I understand it, Italian filmmakers weren't always as careful as they should have been.
No, they weren't careful at all [laughs], but I knew what I could do and what I couldn't do. In THE SECRET 7, there is a scene where I am on a horse chasing the heavy while my leading lady is in a chariot. They wanted my character to dismount from the horse to the chariot at a gallop using a double. I had worked with that horse for about three or four weeks and it was a wonderful horse. I asked them to let me try the stunt myself, riding along the side of the chariot. Then I could grab the bar that goes around the chariot and lift myself in, with the camera staying with me the entire way. I practiced it several times and it worked, so they only had to use a double in the shot where the chariot flips over. That is probably why I worked so much over there; they thought "We can get Tony Russel to star, that way we can save money on a stunt double [laughs]!" Of course, the stunt guys may have resented that a bit.
Posted by William Connolly at 6:39 AM