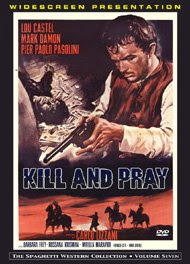 Carlo Lizzani: My Western is a minor episode. Among other reasons I made UN FIUME DI DOLLARI (THE HILLS RUN RED) in '66 with the American pseudonym Lee Beaver because it was the moment of the wave of Westerns, and to pay back De Laurentiis for having lent me a hand working in that period of our cinematographic "maccartismo". With him I'd made IL GOBBO (THE HUNCHBACK OF ROME) and IL PROCESSO DI VERONA (THE TRIAL OF VERONA). To repay him, I did a Western using an American name when he asked me to. And I did it too for the reason so many of our directors do television commercials – money. Then I made REQUIESCANT (KILL AND PRAY), which had pretenses to being something more serious, and I did sign it in fact, in order to raise funds for a commune some friends and I had established. I consulted Pasolini about this since we were so close in those days, and he approved the idea. He said, "But yes. Why not?" The idea for the Western and of Western films (in general) amused Pier Paolo a great deal. He'd acted for me in GOBBO, and he ended up playing a small part in REQUIESCANT. He was very open minded, never taken aback by anything.
Posted by William Connolly at 1:49 PM